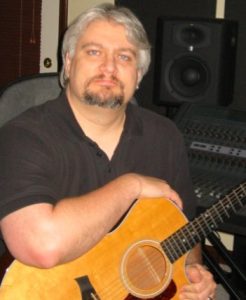 I’m going to start this article off with a multiple choice question.

How many people have heard of Mitch Gallagher?

In this day in age it seems like widespread attention only goes to the people that are the easiest to market, so we like to balance that out and bring attention to people with greatness worth looking at.  His name will be sung when we march.

But we’ll get to that in a moment.

At GearFest he demonstrated tone comparisons between guitars and amps. He briefly skimmed the surface of his background dove into the demonstration.  He had played an array of different guitar brands with different builds including a Strat, Telecaster, Les Paul, SG, semi-hollow, and a hollow body guitar.  He demonstrated several combo amps of different wattage from Fender, Vox, Marshall, and Line 6, and hit a Bogner head and half-stack.  Pedals would have been included had there been time for it.

Things like this are always fun to see live.  Even if you’ve already got a solid grasp on subject matter.

But just who is this Mitch Gallagher guy? Furthermore why should you care that I’m writing about him?

Turn the clock back exactly X years.  A 15 year old Mitch Gallagher who presumably had more color to his hair at the time began his tenure as a guitarist.  Oh woe.  What did the neighbors think?  More importantly what experiences were to follow?

His studies include composition and classical guitar and he’s toured with several bands of the rock and country variety.  He’s written several books on working in studios, understanding Pro Tools, and he’s even written bunches upon bunches of articles for various magazines.  While he juggles that in his left hand alone he also offers his services as a producer and engineer, a composer, and a recording artist.  All of that while being Sweetwater’s Editorial Director.

Oh yeah.  Did I mention he’s won a Grammy? Yeah, back in 1991 Gallagher had composed a modern classical song that he’d applied the Fibonacci sequence to.  That.  Is.  Awesome.  This is where my personal interests start seeping through.  Whenever I hear of people applying mathematics like Fibonacci or the golden ratio or pi or whatever to music my pants always seem to feel a few sizes too small.  Things like that take a special kind of insight and an ability to over think and this guy’s won a Grammy for it.