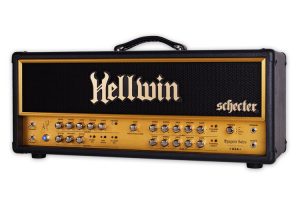 Schecter has taken a dive into the world of amplification with their new amp – designed with Avenged Sevenfold’s Synyster Gates, and the brilliant amp designer James Brown. James is very well known for working with Peavey and Kustom amps, serving in a primary role that he calls “tweaking” – that is  – the fine tuning.

Synyster Gates was involved in the design and construction of the amp every step of the way. While unveiling the amp at NAMM 2013, Synyster called it the “Coolest day of my life.”

Synyster also talks about how the amp was named. He spent much time trying to come up with a great name for the amp, which was a quest eventually resolved after drinking 5 or 6 manhattans with his cousin. Synyster’s middle name is Elwin, and that night with his cousin they came up with the name “Hellwin”.

Synyster was mostly interested in playability – even above sound – something that responded to his style and gave appropriate feedback. He was also very concerned that they end up with a versatile amp.

The amp designer, James Brown and Synyster spent hours working on the tone, and the way the amp handled the attack of the picked note.

Those hours were spent going over different sounds and styles, and had many of Synyster’s favorite amps brought in during that process. One of the end goals was to have an amp that a lot of different people could find a great sound with.

Schecter says the amp is much more versatile than it appears – due to the fact that Synyster enjoys playing many different styles.

An example of this is all the time they spent dialing in the clean tones – and this amp does deliver in that area. There are two clean settings, representing the UK and a US clean sounds. 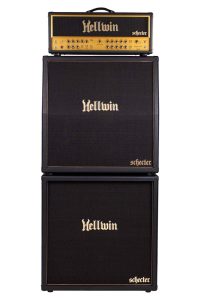 The focus knob adjusts the input to react appropriately to the kind of guitar that’s plugged into it. It’s got “tight mode” – which is for 6 strings, and “normal mode”, also for 6 strings. After that you can dial up 7 and 8 string modes, which change the EQ to deliver more low end accurately, as well as adjust the delay of the response back from the amp. This appeals to many 7 and 8 string guitarists.

The XLR direct out is different in one important way. Instead of making it sound like the cabinet with an SM57 up against one of the speakers, James Brown modeled it to sound more like you were standing a few feet in front of the amp playing it.

The power section is equipped with EL34s and the preamps have 12A7s.  Additionally, with a little work you can switch out for 6L6 tubes. 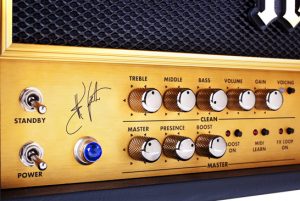 The Hellwin comes with Celestion Vintage 30s at 16 ohms.

The Hellwin cabinets are solid, and constructed from birch.

There are three channels in total – each with independent EQ and gain boost. However, the master, presence, and boost are global.

There are two inputs – active and passive. The active input does more than just reduce the gain – it actually EQs the signal a little to avoid the more sterile sound that comes from some active electronics. 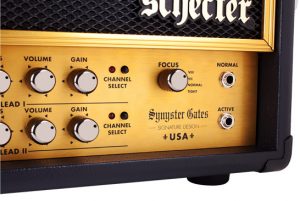 For the two lead channels, there is a noise gate.

The Hellwin will probably be one of the most versatile amps to come out in 2013 – Synyster remarked that the end result was everything he looks for in a rock, metal or clean amp sound. It will go on the street for approximately $2,500.

There are also tentative future plans for a combo version as well, according to Synyster and the folks at Schecter.