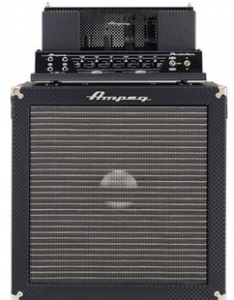 Like all Ampeg Heritage models, the Heritage B-15N is still designed and assembled in the U.S.A. but is now circuit board based. The B-15N features Ampeg’s flexible Baxandall EQ and selectable bias modes for ultimate tone control. The high-quality flip-top, double-baffle cabinet is covered in black diamond tolex and factors heavily into the amazing tone of the iconic original. The Heritage B-15N meticulously recreates the world’s most recorded bass tone.

The amp is mounted to a board that flips over and slides into the speaker cabinet. Once secured the board becomes a flush piece of the cabinet top. Compact, protected and easy to transport.

As a bass amp, it was awesome. Those big 15s would take on anything you could dish out with a bass guitar. Later, when I started playing guitar, this was the only amp I had so it was pressed into service and was an absolutely indestructible tone monster. Simple is good, y’all.

Get the full details at Ampeg.com.

With a street price of $89.99, the Vox StompLab IIG is quite the bargain when you consider what’s on the menu: 100 preset memory slots, 20 user memory slots, 62 amps, 12 cabs, 20 effects, tuner and an expression pedal. The IG, $69.99, is the same unit without the pedal. A bass version of each is also available at the same prices.

Each can be used on your pedalboard or for stand alone practice by plugging in your headphones. A nice touch. The StompLab can be powered by 4 AA batteries or your 9 volt pedalboard power supply.

The factory presets and the user memories are accessed via a rotary switch, which selects banks – there are 10 banks of 10 factory presets and a single bank that contains all 20 user presets. Two footswitches scroll up and down through the presets in each bank. Since the StompLab is designed with the novice guitarist in mind, the factory preset banks are listed by musical style; Ballad, Jazz/ Fusion, Blues, Rock, Metal, etc…

Each preset is made up from seven modules: pedal, amp/drive, cabinet, noise reduction, modulation, delay and reverb, into which the various effects are loaded to make unique sounds. For example, there are 9 modulation types, 8 delay options and 3 reverbs. The amp/ drive module offers 44 amp emulations, 18 drive types and 12 cabinets.

Editing presets is easy but the screen only supports 2 characters, so everything is abbreviated and referring to the manual is required to know what you’re editing. Also, the effects only have 2 parameters you can tweak, using the chickenhead knobs, although the amps have 6 adjustments. But, for $90, there is a lot of bang for the buck and many really usable sounds, some of which are stand alone quality. Vox is a Korg company so you can safely assume the sounds are first rate.

Bypassing the StompLab is accomplished by pressing both footswitches at the same time. Just hitting them bypasses all effects, but holding them down for a second or so mutes the StompLab’s output and turns on the tuner.

Used as a stand alone multi effects pedal, the StompLab is completely usable. Its small size makes it a candidate for addition to your pedalboard as well. Check out the all the facts at voxamps.com.