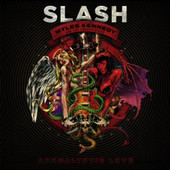 Slash has given us another amazing album today – his first in over two years. It’s currently sporting 4 and a half stars on iTunes, after just a few hours.

The last album, the self titled “Slash” went platinum in Australia, Canada, and New Zealand, and peaked at #3 on the US charts.

Apocalyptic Love was written during the band’s hectic tour schedule, beginning in June of 2011, and the writing process was a fairly laid back exercise. Slash told Billboard, “There was never the pressure of ‘We have to get together and work on this stuff.'”

Myles Kennedy, known also for his lead vocal work with Alter Bridge, comprised of the remaining members from Creed, is taking on the lead vocal duties this time, after proving himself on the tour supporting the last album, which featured a host of talented vocalists, from Ozzy to Fergie, to Chris Cornell (And many more). At the time, Slash was so impressed with the two tracks Myles sang on, that he decided to take Myles on the tour – a testament to the fact that Slash knew he could handle all the material, regardless of who originally sang it – and was once again impressed, so this time around, it’s Myles Kennedy on lead vocals for the entire album.

From what we’ve heard, Myles really brings it home on this album.

The album was recorded live and analog, just like the last one, and features the same band (Todd Kerns on bass, and Brent Fitz on drums) Slash took on tour to support it.

Production duties were handled but Eric Valentine, who Slash refers to as a genius, and a no brainer choice for this album. The engineer was Cian Riordan.

The album artwork is pretty damn cool as well, courtesy of Frank Maddocks.

The tour for this album will begin in June, and (from what we know so far) conclude in early August. Keep your eyes peeled for those tickets.

Here’s some good news for unsigned bands – Slash will be giving twenty of them a chance to open for him on the tour – this is a collaberative effort between Slash and Guitar Center. Check out this site  for more information.