We’ve fully explored all of the elements that make us unique, from the epic and intense to the atmospheric and cinematic.” – Petrucci 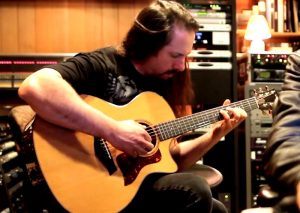 Dream theater fans won’t have to wait too much longer for the next album, although it is going to be a little bit longer than the estimated “Summer of 2013” that Dream Theater originally talked about back in May.

The album will be self-titled, and will be available on September 24th, 2013, and was engineered and mixed by both John Petrucci and Richard Chycki, who is known for his work with Rush, Aerosmith, Def Leppard, Our Lady Peace, Trivium, and many more.

This will be the first album that features Mike Mangini in a writing capacity – Mike replaced long time drummer Mike Portnoy after writing had begun for the last album, back in late 2010.

John Petrucci is pretty impressed with what Mangini has been able to come up with in the studio, saying “When people hear the drumming on this album, they’re gonna be pretty freaked out. On the last album, he did a great job, but he wasn’t there for the writing process and he was interpreting drum parts that I had programmed.”

Petrucci also says, “We’re back to writing as a band – we feel like this album is our strongest work to date. It’s our most cohesive and broadest expression of our different styles and sounds. We’ve had a different sonic perspective, having Rich Chycki engineer the record.”

Chycki had this to say: “It’s really amazing to see a band like this – they have a lot of depth, and put in a lot of attention into the detail of their work, whether it’s from a playing point of view or a songwriting point of view.”

When it came time for John to describe the sound he wanted in the studio, he described it as a “rich piece of chocolate cake.” He was looking for a “multilayered, rich, satisfying sound, with a lot of body and depth, with just the right amount of icing on the top.”

You can watch the video below to get a little preview of Dream Theater in the studio, as well as some more context on the quotes above.

Dream Theater in the studio

We’ll be bringing you more information as it becomes available, but from the sounds in this video, it seems like the album will bring fans a lot of what they are anxiously awaiting, as well as some newer, more dynamic sounds, and a fresh bout of creativity.