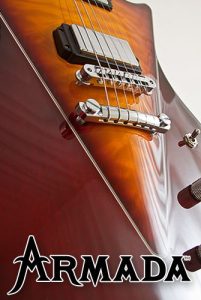 In a move that may be aimed at Les Paul players and other short-scale enthusiasts, Music Man® guitars has created an exciting new electric neck-thru model, the Armada™. Until now, this elusive six-string has rarely been seen or mentioned in the media. But rumor has it Music Man® will unveil this potential future classic at the latest Winter NAMM show, Jan. 24 – 27, 2013, in Anaheim, California. You can bet other neck-thru fanatics like ESP, B.C. Rich, vintage Rickenbacker and Gibson® Firebird aficionados, won’t be the only ones watching.

The Armada™ looks roughly like a backwards Flying-V which has been plugged onto the bottom half of a Fender® Mustang; however, the narrative description doesn’t do it proper justice. That’s because Music Man® has come up with a unique plan.

Under lock and key 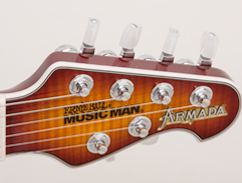 As far back as November 2012, the Ernie Ball® and Music Man® discussion forums have been abuzz about the Armada™. Too bad there hasn’t been much pre-release hype or many photographs of the guitar.

The mysterious Armada™ has only been spotted once or twice, on the cover of industry magazines and again online in an advertisement for the Music Man™ website which currently states, “To receive updates on this model enter your name and e-mail address below.”

To date, there have been no product announcements or press releases for the Armada™. Amid the cloak and dagger atmosphere we were able to secure a shot of it during the production process.

What’s the big deal about the Armada™?

Neck-thru design means a single piece of wood is used in the construction of the guitar, usually straight down the center, from the headstock to the strap pin. Panels or “bouts” are then added on either side. A noted example is legendary Texas blues slinger Johnny Winter’s Gibson® Firebird.

A short scale guitar technically means the neck has a smaller length and the frets are a bit closer together. Generally speaking, “short scale” has come to be associated with the superior quality of Gibson’s® Les Paul standard 24.75 inch length, which the Armada™ precisely matches.

According to Music Man®, the Armada’s™ solid body is “mahogany with V-shaped mahogany and figured maple top.”

The bridge is a standard tune-o-matic with Graph Tech tailpiece and thumb wheel height adjustment.

The pick-ups are two custom Music Man® humbuckers, at the bridge and neck. There are master control and tone knobs along with a 3-way selector switch.

Missing from the Armada’s™ information profile are specific important tidbits, including finish options and the price.

Nevertheless, keep your fingers crossed that the Music Man® Armada™ is unveiled at Winter NAMM 2013. It’s time we get a close-up look at what promises to be an exceptional guitar.