“This easy-to-use tuner is concealed and blends in with the aesthetics of the instrument…The tuner can also stay on the guitar while in the case…”– DAddario.com 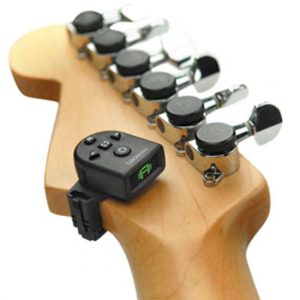 Mention D’Addario & Company, Inc. and you think of the highest quality strings for fretted and bowed musical instruments. But did you know D’Addario is also the world’s largest manufacturer of instrument accessories, marketed under seven different proprietary brands including the Planet Waves line of products?

Speaking of Planet Waves, have you checked out the company’s new NS Micro Tuner? We had the chance to evaluate this tiny but efficient piece of equipment and the results might surprise you.

The NS Micro has a stealthy profile

Leave it to the folks at D’Addario’s Planet Waves to come up with inventive music gear. What’s more, when they say “micro,” they aren’t kidding. The NS Micro Tuner is approximately half the size of a small flash drive. It’s not much wider than a human thumb.

Compatible with acoustic or electric guitar, bass, mandolin, ukulele and banjo, the NS Micro Tuner is a clip-on model so small it can go unobserved when positioned behind the headstock. There are no cables or wires and nothing to plug in. Just pluck the desired strings and get in tune.

According to daddario.com, the Ned Steinberger-designed NS Micro Tuner “allows for the musician to have a full view of the screen while the tuner remains virtually undetectable by the audience.”

About the NS Micro’s low profile, the company points out, “This easy-to-use tuner is concealed and blends in with the aesthetics of the instrument.” 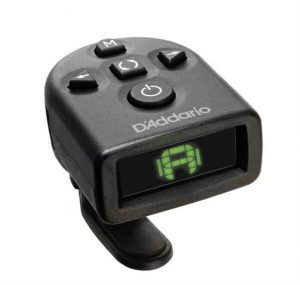 Notably, against a dark headstock, the tuner is nearly invisible, in front or back.

There are no pointers, dials and or knobs on the NS Micro Tuner. Making it work is simple. Pushing four small buttons is all it takes.

Besides the obvious on/off power, there’s a mode button that allows the user to change between the tuner and a built-in metronome. The flip button turns the screen upside down for better reading, depending on the viewing reference. Two cursor buttons adjust the calibration of the tuner and metronome.

In addition, the NS Micro tuner’s point of interaction is intuitive and trouble-free. Red means the string is out of tune; yellow, almost in tune; and green indicates it’s in tune.

An added benefit: The back-lit screen is easily read during live performances.

One of the unique features about the NS Micro tuner is the reversible screen. The pivoting action of the tuner allows it to be placed in front or back of the headstock, thus the images can be turned around on the display. It’s a handy option to have when positioning the device.

The tuner is held to the headstock by way of a plastic ratchet clamp, resembling an undersized capo, which remains securely set. The NS Micro is simple to adjust, didn’t harm the wood or leave a mark on the axes we used and doesn’t even have to be removed from the guitar when it’s placed back into the case.

That’s no hype. We found the NS Micro Tuner to be extremely fast and efficient.

The calibration on the tuner can be adjusted from 410 to 480Hz. Our unit went directly into the standard 440Hz without having to correct or fine-tune anything. The metronome tempo ranges from 20 to 270bpm. We tested the NS Micro Tuner on an acoustic National Steel Tricone and an electric Fender Stratocaster. It worked equally well on both.

The NS Micro Tuner from Planet Waves retails for $32.99 USD.

It goes to show, big things come in small packages.

Yep, big prices come in small packages too. Hope it has come down a bit by now. Anybody do a bulk deal?

Tried to clamp it to MY neck (Imma lead sanger), bout choked to death. Dang

VERY tiny. High on the cool factor. My Snark is now on acoustic duty.

Typically, I’m very put off by tuners clamped to the head of the guitar — but this one might be discreet enough to work. Thanks for the swell review.