The S Series has been pleasing guitarists and crowds alike since 1987 – when the “Saber” series arrived on the market with it’s sleek contours and super fast, think necks. At the time they certainly had the thinnest neck of the entire Ibanez catalog – measuring in at 17mm at fret one.

Today, they continue the tradition with speed, playability and the mahogany body they’ve always been known for.

The Iron Label series means metal – and we’re talking about the type of music, here. They’re known (and built) for simplicity – as Ibanez puts it, “All you need, Nothin’ you don’t”.

Now, Ibanez has made that super fast neck even more super – with the Nitro Wizard neck, which is just as fast and comfortable to play, but has extra strength and durability as well. It’s a three piece combination bubinga / maple neck, so it’s strong and it’s going to add an amazing tone when combined with the DiMarzio pickups that are matched to the mahogany body.

The SIR70FD is a six string model, and the SIR27FD is a 7-string model. Both of them come with the mahogany body, the 3-piece bubinga / maple neck as mentioned above, and they’re topped off with a rosewood fingerboard.

The rock solid Gibraltar bridge provides a stable place for your picking hand, and is going to maintain a good connection to the body to make sure you don’t lose any of that tone in a complicated trem system. That’s one of the features that makes Iron Label guitars beautifully simple – it’s a simple, functional bridge, and it’s smoothly shaped to you’ll be comfortable – so you can ask the impossible of your picking hand without comfort issues.

Staying in line with the simple theme, the electronics are exactly what you need, and not a thing past that. There is a five way pickup selector, and a volume and a tone. Starting at the neck, the pickups are all DiMarzio – an Air Norton humbucker, a True Velvet single coil, and a True Zone humbucker at the bridge.

As for finishes, Ibanez follows Henry Ford’s simple theory – any color you want, as long as it’s Iron Pewter. And they’re beautiful guitars just like that. 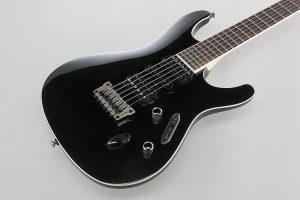 One nice thing that comes from simplicity is value – and by that I mean that Ibanez doesn’t have to spend as much to crank these out – even at a high quality level, because they’re so uncomplicated. You can get the seven string (SIR27FD) for around $799 street, and the six string model (SIR70FD) for $699.

If you’re into metal, and aren’t really interested in a trem system, these guitars are a great way to get a lot done for a great price.

Check them out, or get one for yourself:

They’re both currently available in 8 payments from zZounds, if you don’t have the cash right now. You can play while you pay.