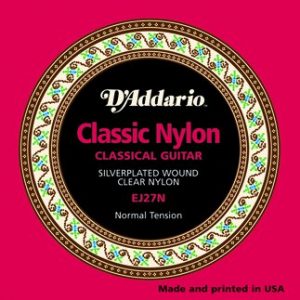 I started out my guitar playing career, as many do, on an old classical guitar that was lying around the house when I was a kid. I even took some classical lessons, but before too long I was seduced by the sounds of the electric and the acoustic steel string, so the old nylon string was left to gather dust in a corner.

Then, a couple of years ago I got into Jerry Reed, who picked a gut string like nothing I’d ever heard, so I pulled out the old classical and had a go, but I didn’t really get on with the flat fretboard any more, and I couldn’t keep the poor old thing in tune, so it went back in the case.

I did, however start to notice nylon string guitars lurking in the back of mixes on records I owned by all sorts of people – it was in Country, New Orleans Funk, even some Blues stuff, so the idea of having a nylon string in the arsenal kept appealing to me.

As an experiment, and after reading lots of things online about why it wouldn’t/shouldn’t work, I thought I’d have a go at stringing up an old steel string with a set of nylons, just to see if it would work. I got a set of ball ended nylon strings, and put them onto my old Yamaha APX acoustic. I was expecting to have to widen the nut slots, and do lots of fiddling around to make it work, but apart from a quick adjustment of the truss rod, it all seemed to be O.K. There are a few drawbacks – the gearing on the machine heads is different for nylon and steel strings, so you have to turn the heads more than normal to get the string to move, but to be honest, so what? The intonation is ever so slightly out when you get up high, but bend the string a little and that’s sorted too!

I now have a nylon string that has a great ‘snappy’ sound to it, and that I can also use live, as my old APX has a pickup in it. But the best thing is that I can get that cool old nylon sound on a guitar with a regular curved fretboard and narrower neck.

So if you’ve got an old steel string lying around not doing much, slap a set of nylons on it and see what it opens up in your playing, or as Jerry Reed might say, “Jump on it, Son!”