Slash Update: On Top Of “Angry Birds”, He’s Working On Another Album 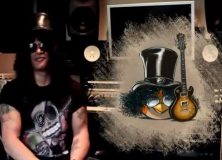 If you’re a Slash fan – or an Angry Birds fan, you’ll be interested to know that Slash has been featured as an “Honorary Angry Bird”. In the latest version of the addictive game, you can fling Slash – complete with top hat and Les Paul – at the piggies. For real.

Awhile back Slash let on that he was a big fan of the game, and they later reached out to him to see if he would mind them using him in the game. Of course he said yes – he’s been addicted to the game since 2010 when a friend introduced the app to him.

That’s not all the news in this arena, though. On top of being an Angry Bird, he is contributing to the game in another way – with a “Slash version” of the Angry Birds theme song. Here is a little video of Slash playing through the song and talking about how it all came about.

Now, about the next album

Slash has made two comments in the past few days on his Twitter account – one stating that he has a bunch of new material from ideas that he recorded during the tour. He says that he is going to start “putting them together.”

A few minutes later he posted a follow up – speaking to Alter Bridge fans who might be concerned that he would be holding up Myles Kennedy for the new album and tour – saying “AB fans have no cause for worry. They will soon release a new CD and tour this year. I will catch Myles on the flip side.”

Slash has been busy

On top of all this, on March 11, 2013, Slash was playing along with Joe Perry and Steven Tyler at John Varvatos’ annual benefit for the Stuart House charity. Joe and Steven played an hour long set, which included many Aerosmith classics, and then brought Slash up on stage to play on “Mama Kin” with them.

Also, at NAMM 2013, we saw the introduction and first demos of Slash’s new SL-5 Class A practice / recording amp.

With the exception of a few more dates, Slash has pretty much wrapped up the 2013 portion of his tour, so it’s good to hear that he’s got plenty of material and is ready to start working on it.

It was an extremely successful tour and album – Slash and crew hit number 4 on the Billboard 200 chart with Apocalyptic Love – in the first week of its release, and in early February, released this video for the track “Anastasia”, so we’ll close this article with a peek at that, if you please: