When you make a mistake onstage, you’re trapped—you’ve got to carry on playing the song anyway. When you fumble a chord or accidentally start a lick on the wrong fret, the moment’s already shrinking into the rearview mirror, and the show must go on.

It’s a real drag living with the regret of knowing you could’ve done better.

But in your practice room, you’re not a performer. You don’t have the pressures of entertaining a paying audience. You can—and should—call a time-out to immediately seize and correct mistakes before they have a chance to reach the stage.

Come to an immediate and complete stop 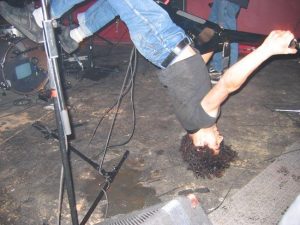 This tip is dead simple, but it could serve you for an entire lifetime. It has a thousand applications.

The tip is: stop playing.

When you hit a sour note, when your picking hand loses rhythm, when some of the notes in that barre chord go splat instead of ringing out… stop what you’re doing and immediately attempt it again.

Take deep breaths and repeat this process as many times as you need to. That old saying “Repetition is the mother of skill” may sound like a cliché, but it’s damn true. Keep calm. Time is on your side. You can keep at this for as long as it takes.

For example: If the chord progression in the chorus of a song is giving you trouble, practice those changes over and over until your transitions are smooth and clean—even if it takes a week. Fumble a chord change? Stop what you’re doing. Start over. Try again.

Remember: if you practice something ten times, and finally nail it once, by all means celebrate that milestone! For about a second. That small victory is sweet—but use it to spur yourself on. If you want your performance to be reliable, your work is nowhere near done.

Keep repeating a given problem until you can play it correctly nine times out of ten, not just one time out of ten.

Practicing that troublesome chord, lick, or passage over and over is the only way to ensure reliable performance. Err on the side of being too well-prepared—because with the high nerves, adrenaline, and distractions of live performance, licks you could normally play in your sleep become difficult.

Ignoring practice room problems is dangerous. If you allow a problem to persist unchallenged in practice, it’ll spread all the way to rehearsals and then to the stage. And again, because the stage is a more stressful and distracting place to be than your living room, any mistakes you make in practice are likely to be worse onstage. So take even minor problems seriously.

I realize that correcting errors and drilling yourself this way might not be the most fun you can have with six strings and a chunk of wood. But hey—you’re tough. You can cope with a little boredom if it means a payoff in skill, right?

Mentally carve this line into the wall of your practice space:

Fix it in practice, and you’ll

P.S. Always remember to slow down the tempo as necessary. There’s no getting around this—first you crawl, then you walk, then you run. Skipping straight to running won’t do you any good.

If you’re stumbling, slow down. Find your rhythm. Then speed up only gradually to performance speed. Stay focused, and stay patient. Soon enough, you’ll nail it.