Opeth – Heritage – First Thoughts Out Of The Cellophane 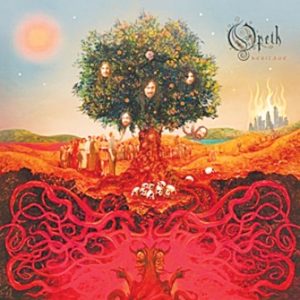 This is gonna be a tricky one.

I seldom like to drop the word “review” when giving my thoughts on an album because it seems to blur the line between art and something just to pay the bills.  So when an album like this is literally fired from a distant planet in a galaxy yet to be discovered and just happens to land safely in my lap (ok, so I bent the truth a tad) I find that the “R” word is even less applicable.

I’m the kind of guy that digs surprises, and Opeth being known for routinely putting the ol’ one-trick-dog to sleep, I figured surprises were abound so all I knew going into this was that Mikael Akerfeldt abandoned all growls and only sang.  Before even listening to you I can imagine forums all over the internet filling up with presumptuous goofballs opining the album was destined to crash and burn while others would naturally stand up for them.  I never looked into that, but it’s the internet.  Of course people were arguing.  What else is the internet here for?

I personally do things objectively.  The album was released in the USA yesterday and I’ve had plenty of time to form an opinion on it and I’ve done just that.

The album certainly is different.  It succeeds in too many ways to accuse it of sucking, though, so in my eyes it’s a great album for a number of reasons.

Firstly the tone of the album.  It’s not really a metal album as their history has been, but rather like a modern 70s rock album.  A really original, modern prog rock album.  The album more so is saturated with a nice overdrive throughout than it is caked in distortion and the real benefit of that is that the natural sound of the guitars they’re playing really bleeds through.  So when they use a Strat you’re going to hear a nice, thick Strat sound, and the same goes for the rest of their guitars.

So the album sounds incredible in that sense and that goes hand in hand with the production and mixing by Akerfeldt and was reinforced by Steve Wilson, who had produced previous Opeth albums Blackwater Park, Deliverance, and Damnation.

Additionally with the clear production and tone of the album the technique is a lot clearer and thus the requirement of a good performance raises.  There’s never enough grit or effects to the tone to hide poor technique behind, so any screw up would be very obvious.  I didn’t notice anything that sounded remotely describable as a screw up, so I say they pass that with flying colors.

Of course the big thing that has everyone on the edge of their seat and biting their nails is the song writing. Akerfeldt’s singing is great.  If you’ve heard him sing before and you’ve enjoyed it then you get it here and his performance is spot on.  What more do you need to know?  The style of songwriting is very similar to previous albums, but still different.  It’s pretty much not possible to listen to Heritage and not hear the Opeth sound that has been developed for over 20 years.

The album clocks in at about 56 minutes with 10 songs and each one features those unique, dark progressions, odd rhythms, and of course E-Bows.  If you were into the really long songs then you may be disappointed to know that most songs are under 7 minutes, with “Famine” and “Folklore” being the only two just over 8 minutes.  The longer song style is still there, but not as explored as on previous albums, though there’s still no need to fear.  Even with shorter songs their experimental structures are ever lasting.

Speaking of dynamics, did I mention how bonkers they are on this album?  I’ll give you an analogy.  The album is like famed magicians Penn and Teller.  Sometimes it’s loud, harsh, and intense, then boom.  Quiet.  Really quiet.

In addition there was a special edition with a bonus DVD released that I promptly snatched up.  It came with two bonus tracks “Pyre” and “Face in the Snow” which considering their length and the length of the rest of the album I’m curious why they didn’t just include them on the disc with the rest of the songs.  They’re both really good songs and I would’ve liked to have had them on the disc.  They’re available for download though, so it’s more so a convenience thing.

In addition the DVD has a documentary taken during the making of the album.  It’s good for a few laughs and it’s cool to see how they put things together.  They go through the gear they had used on the album, so people really into tone might find it a worthwhile investment.  You can take all of that for what it’s worth and decide if you think you need it over the regular one or not.  Clearly I bought it so who am I to judge?

In summary the album is solid, and has a great sound. A lot of people will be flustered because of how much of a change it is from previous albums, but a new group of fans might very well find this a great listen.  For a band that had established themselves as a heavier death metal band to release something that sounds more like Yes it’s a pretty brave move.  The style, the flare, and the feeling is all there, though I think at worst some people might find it somewhat of an acquired taste.

It certainly does make one wonder what the next album will have in store for us.