Lots of News From Orange Amps 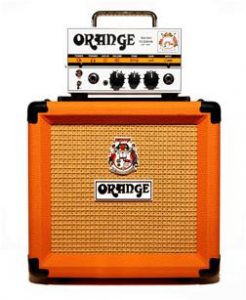 Fans of the stylishly, citrus guitar amp builders Orange are adding a new installment to their Tiny Terror line.  Soon to be released is the Micro Terror amp.  The Micro Terror has taken the first place podium in the Tiny Terror line for the smallest amp yet both in dimensions and weight.  However the exact dimensions and weight have not been divulged anywhere, so that’s all the more specific I can get, though it’s a fair presumption you won’t throw your back out lifting it.

Powered by a 15 volt DC power supply the Micro Terror is armed with a 12AX7 pre-amp tube with 20 watts RMS solid state output.  The Micro Terror can also be plugged into any cabinet provided it has 4 Ohm minimum handling.  Beyond that everything is fair game.  And if you’re looking to play along with a backing track there is an auxiliary input for your MP3 player or CD player (that probably includes an iPod so you can plug your Apple into your Orange, nyuk, nyuk, nyuk).

The Micro Terror is cased in a high tensile steel case for maximum durability and resistance to the most unruly of journeys abroad.  The style of the amp itself is to capitalize on those old vintage British crunchy, overdriven tones.

Because we all need something to plug our amplifiers into Orange has thought in advance and developed the PPC108 cabinet.  Within this small, vibrant box resides a modest 8-inch speaker designed to deliver all the punch your tone could yearn for.

Orange has developed their own style of cables built out of pure copper that has had 99.9% of oxygen removed.

Orange Amps will be displaying the Micro Terror and the PPC108 along with the rest of their catalog at the upcoming NAMM.  To get a good look and listen to their selection of amps simply just seek out booth 4890 in Hall C. 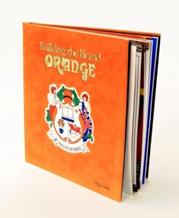 While you’re there feel free to have Cliff Cooper sign your Big Book of Orange, the full colored, giant, two-hundred page coffee-table book.

If you don’t happen to have one then rest assured they will have an abundance on site for you to purchase and sign all in one fell swoop.

Cliff Cooper won’t be the only celebrity making public appearances at the Orange booth in NAMM.

Slated for a full product demonstration is Slipknot and Stone Sour guitarist Jim Root to demonstrate his signature #4 Jim Root Terror head at 2:00 PM on Saturday, the 21st.  Doug Doppler will also be demonstrating Jim Root’s #4 Terror head as well as the re-issued OR50H and the DIVO OV4.

Tony Catania of the Jason Bonham Led Zeppelin Experience will be performing on Friday and Saturday, 20-21, and lastly Earl Slick will swinging by for an autograph signing.