Steve Vai’s Ultra Zone guitar has been stirring up quite a buzz lately since he finally took it out of the case and started performing with it live while donning a white coat decorated with LED lights in what can only be described as a throwback to the eccentric outfits of the 80s.

The guitar itself is sculpted as Alistair Hays of Emerald Guitars has been known to do. The neck is a carbon fiber with stainless steel frets while the body is a carbon / glass composite. It uses two EMG SA active single coils in the neck and middle position with an 85 active humbucker down by the Steinberger Trans tremolo. Finishing off its otherworldly appearance is the color shifting chameleon paint finish. 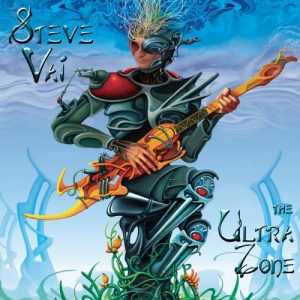 Way back in the year 1999 Steve Vai released his fifth full length album (not including re-releases and Eps). Just at the turn of the century The Ultra Zone was released and it featured artwork by Aaron Brown of an alienish, cyborgish Steve Vai playing something that looked like it could be used to pop bottle caps off a bottled carbonated beverage. Obviously it was the future of the guitar as we know it.

Well it wasn’t too long after that that Alistair Hay was introduced to Vai’s music and upon seeing the artwork for The Ultra Zone he felt it only natural to make it into an actual tangible and playable guitar. Fortunately for him the original artist didn’t design it like Escher’s impossible cube and his guitar turned out very accurate to the album cover’s version.

In short it became a several year work in progress and the whole back story is far more an interesting read than I can offer in this Reader’s Digest version here, so for further reading hear it from the man himself at Emerald Guitars’ web site.

Own an Ultra Zone Guitar

Alistair Hay of Emerald Guitars as well as the guy that brought the original artwork into the world of three dimensions has opened up preorders for a highly limited run of Ultrazone guitars. Limited to just 100 models now you too can acquire one of these stylish and alien looking guitars so that yes, you too can play a guitar truly not of this earth (wrong artist reference, I know, but it fits in the context).

As I’ve said Emerald is taking preorders already which will require a deposit to set in stone. Afterwards Hay will begin building the guitars as the requests come in. To satiate your anticipation while you wait you will be slapped on a mailing list and sent pictures from their custom shop whilst they build your guitar.

Completion times and final cost estimates are a bit up in the air, but it’s nothing a short email to Emerald couldn’t help to sort out. For more info check out their preorder page here. If you do get one you may want to consider getting one of their custom guitar stands too. The ratio of how bad ass the guitar will look on display would increase handsomely.