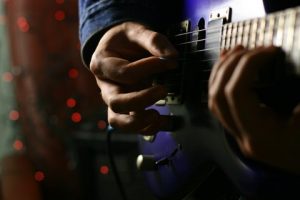 There’s no shortage of information on playing guitar solos in the world. Whether you’re looking for information on developing technique or soloing approaches someone has probably posted something somewhere about it. But the truth is that none of that information on its own is going to make your solos better.

A great solo speaks to people. It does that in two ways:

Since this breaks a great solo down to two core things, the song and the player, let’s start with the song.

Does it need a solo?

A great solo can completely elevate a song. If you don’t believe me, consider that All along the watchtower is a Bob Dylan cover that Jimi Hendrix put such a distinctive stamp on it that many people consider Hendrix’s version to be the iconic one of the song.

This is generally the exception rather than the rule. In many cases, solos are put into tunes as filler material (as in, “We have 2 verses and a chorus and it’s only a minute and a half long….I know let’s throw a guitar solo in over a chorus!”).

If you use punk for model for a moment and take a songwriting lesson from someone like The Sex Pistols, The Ramones or even Fugazi – there’s a notable absence of solos and the songs don’t suffer for it at all. If the solo doesn’t push the song forward, it doesn’t belong there.

It’s all about the context

There are also stylistic contexts for soloing. If you’re playing jazz, prog rock or you’re in a jam band, it’s expected that there’s going to be soloing. But putting a hair metal solo over a jazz ballad probably isn’t going to cut it and this leads to my next point…

It seems like a number of people take “rules” as gospel and I think that it’s important to note that “rules” in soloing are only guidelines.

One of the biggest “sins” in jazz music is to not play the changes (i.e. to not make changes in the solo as the chords of the song change) but the reality is that there are plenty of people who play changes using notes that all fit over the chords and it’s dreadfully dull. It’s not just the notes, it’s the player paying them.

It’s easy to come up with a rule like, “Don’t just play scales over music” but there are plenty of scale-based players who sound great doing that. Paco De Lucia is doing plenty of scale based soloing on Friday Night in San Francisco and for my money that guy’s one of the heaviest players of any instrument on the planet. The key is that not every player could play ascending and descending scale based runs as musically as Paco.

There’s no substitute for experience

Paco is a monster musician and knows flamenco and guitar at such a deep level that anything he plays is going to be musical. If there’s a “secret” to playing musically – it really has to be that musical players have spent a lot of focused time learning other people’s music, perfecting their own music and developing an aesthetic (and as a related secret –  there’s no shortcut for time and experience.)

Do you have something to say?

This is the other ½ of the soloing question. If the song calls for a solo do you have something to say?

Think of musical expression for a moment as developing an understanding of language. A baby will spend a certain amount of time copying sounds. From that comes learning vocabulary and then learning grammar to learn how to place that vocabulary in sentences and paragraphs. It’s not only being able to understand other people, it’s also about being able to express yourself clearly to other people. The words that everyone uses are all common – it’s people’s own sense of style and personality that allows them to string words together in a way to express themselves uniquely.

Now think about how much time has passed in your own life between when you first started to learn to speak and the level you’re currently speaking at. It doesn’t take a long time to figure out how to string words (or ideas) together, but you’re always picking up new phrases and learning new words. Your language is constantly evolving.

Here’s the litmus test for whether or not you have something to say over a solo. Find a completely isolated room where no one will bother you. Get (or make) a recording of the chord progression or the riff that you’re going to play over and (without a guitar in your hands)  – in your head imagine the solo you’d play over it. Then try to sing that solo over the progression (you are in an isolated room I hope!) and then play it on guitar.

If you don’t hear anything – you need to develop some vocabulary. You develop vocabulary the same way that you did as a baby – you immerse yourself in other people’s music, solos phrases etc. , get them in your ears and in your fingers and make them your own.  (If you can’t play what you hear in your head, then that’s the thing to work on!)

99% of the people reading this will laugh at the idea of singing a solo over a tune and learning other people’s licks by ear and I’m here to tell ya that the 1% who integrates this method into a consistent practice regimen will make serious musical gains this year. The most musical guitar lines are the ones that have a vocal kind of quality to them and even if you listen to a notey player like Shawn Lane – he’s singing most of those lines while he’s playing them. This brings me to my final point.

Does it give you goose bumps?

Those goose bump moments in music are the ones where you can tell that someone has just completely put himself or herself out there emotionally through their playing. They’re expressing themselves completely honestly and without editing. Those are the moments that move the player and the listener and those moments are the only valid reason in my mind to take a solo.

All of the other things you read about to help with developing solos (arpeggios, scales, theory, etc.) are valuable tools to help express yourself in this manner but any tool is only as useful as the person using it.

None of these things will guarantee that you’ll play a great solo – but having an understanding of why you’re taking a solo and what you want to say will at least make any solo you play something expressed  in your unique voice.