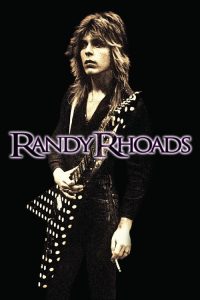 Velocity Books is publishing a biography on the late legend of guitar Randy Rhoads in a 400-page, 10” x 13” book filled with rare pictures to accompany the oceans of information on his time in Quiet Riot, his tenure with Ozzy Osbourne, exclusive interviews with close friends of Rhoads (including his then fiancee, and information on the recording of Blizzard of Ozz and Diary of a Madman.

Also included is a detailed look at Rhoads’ performance on a number of songs like Mr. Crowley, Crazy Train, and Flying High again. The book goes into detail about the plan crash that would claim Rhoads’ life and looks at the impact he had on the music industry in the aftermath of his death at 25.

The book can be yours for the asking price $99 and will be formally available as early as September 7th. Authors Andrew Klein and Steven Rosen are scheduled for a book signing in Los Angeles on September 8th. It’s also an interesting tidbit of information to know that this is technically an unofficial biography since the Rhoads family didn’t sign off on it as they have always been a bit reluctant to do so in any Rhoads biographical case.

The biography Randy Rhoads while having been compiled under the assistance of numerous people, was shaped and pieced together by Andrew Klein and Steven Rosen with Peter Margolis as the senior editor of the book.

Klein, who began working on the book with Peter Margolis, who was a friend and guitar student under Rhoads himself, regards Rhoads as the biggest influence in his life thus inspiring him to put this book together decades later. Klein having been a friend to the Rhoads family and given his knowledge of Randy took it upon himself to give Rhoads’ career and impact a proper tribute from not just what’s available in public domain, but from the perspectives of his family and friends.

Rosen, an established music journalist with a career almost old enough to be my dad, had several interviews with Rhoads that were consulted to bring out new information about the guitarist that you can’t just find on Wikipedia (at least not until after people get a few copies of the book).

Steven Rosen has spent nearly four decades in the business as a journalist and an author. For four years he worked for Guitar World magazine and produced seven cover stories including three on Van Halen. After that he filled a similar role for Guitar Player magazine and in six years he produced sixteen cover stories, a number of which were featured in special reprints.

After establishing himself as a guy that knows what’s going on in the guitar industry Rosen’s move into books began with The Beck Book on Jeff Beck. Following that his resume was buffed up with other books like The Artist Formerly Known As Prince, Bruce Springsteen, and The Story of Black Sabbath: Wheels of Confusion.