The Superego Synth Engine from Electro-Harmonix 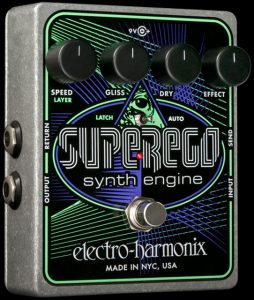 The Superego Synth Engine by Electro-Harmonix is a unique new guitar effect pedal that combines elements of sampling, synthesis and infinite sustain. The pedal allows the guitarist to freeze sounds and sustain them indefinitely, gliss between frozen sounds and layer sounds on top of each other. With its user-friendly and compact design, the Superego lets you create some truly, unique “non-guitar” sounds that might get your audience to wondering where you’re hiding that keyboard player.

The Video is at the bottom of this page, but first we’re going to look at some of the functionality.

The Superego has 4 control knobs: Speed/Layer, Gliss, Dry and Effect. The Dry and Effect knobs each control the level of the dry and wet signals coming from the pedal. The Gliss control sets the speed at which sounds morph into one another; this is similar to a portamento setting on a synthesizer. Lastly, the Speed/Layer knob controls either the speed of the attack/decay of the frozen sounds (Auto and Momentary Modes) or how loudly previously frozen sounds mix with new ones (Latch Mode).

The Superego has 3 modes of operation, Auto, Momentary and Latch.

In Auto Mode, the Superego automatically detects and samples new sounds, chords and notes. Turning the Speed and Gliss knobs all the way down in this mode produces an orchestral, pizzicato effect that can make your guitar sound like a tripped out harpsichord from another planet. In contrast, by turning the Speed knob all the way up a guitarist can sustain chords and notes infinitely. Also when in Auto mode, the guitarist can press and hold the footswitch to allow himself to play over the sustained sounds unaffected; double tapping the footswitch turns the effect off.

In Momentary mode, the Superego will freeze whatever sound is being played at the time the footswitch is engaged. The frozen sound will continue to sustain so long as the footswitch is held down, but anything else the guitarist plays is unaffected. This is a great way to add rich and ominous synth pad accompaniments to a guitar solo, which makes an authentic rendition of something like the intro to “Shine On You Crazy Diamond” possible without a keyboard player.

Finally, Latch Mode is similar to Momentary, except you’re not required to hold down the footswitch to sustain your sound; just single-tap the switch and the sound will hold until you give it a double-tap. This mode lets you freeze multiple sounds and layer them on top of each and is also handy because it frees up your foot to go off exploring other effects pedals on your board, which is quite possibly something you’ll use a lot once you discover the built in effects loop.

The Superego already does a great job of creating other-worldly tones, but it really comes alive when utilizing the built in effects loop. Effects placed in the chain of the loop will only affect the wet signal of the pedal, allowing you tremendous control to shape your sounds: add delay, chorus or phaser for extra depth and texture, some tremolo for cool pulsing effects or slap an EHX POG2 in the chain for some fun, polyphonic action.

The brand new Superego Synth Engine pedal from Electro-Harmonix comes packaged with a 9.6V AC adaptor and is set to start shipping right now with an MSRP of about $283 – but you’ll find it for less than that at your local music store. If you’re looking to expand the tonal capabilities of your rig, this pedal can do it like nothing else on the market, not to mention it’s also a ton of fun to play with.