Review On The EHX Talking Pedal – With Video Demo

The Talking Pedal by EHX – A Review 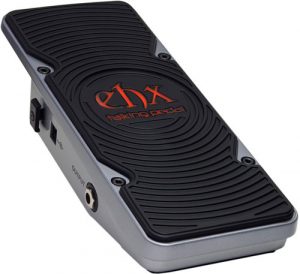 Ever want to create those awesome talk box tones with your guitar without having to shove a plastic tube in your face-hole? Well, now you can. Introducing the Talking Pedal from Electro-Harmonix.

If you remember, a while back I reviewed the Crying Tone pedal also from EHX, which is the first wah pedal of its kind to use absolutely no moving parts. The Talking Pedal uses the same innovative design which means there are no potentiometers and no switches that could possibly wear out over time.

It’s unique filter circuit passes the guitar signal through not one, but two bandpass filters which produces a wide variety of vocal-like vowel sounds. The Talking Pedal’s circuitry is completed with the addition of a fuzz-distortion effect that can be dialed in on the side of the pedal from a scale of 1-10.

The Talking Pedal can get its power either from a 9-volt battery or a or a standard 9-volt DC adapter and can be calibrated for use on slanted surfaces.

Putting It To The Test

I was very skeptical before I got to try out the Talking Pedal. I mean, it can’t be all that easy to emulate the talk box effect with out the most important element of the whole mechanism: the human mouth. However, I must honestly say that EHX has really met the challenge. They’ve produced a talk box effect and expression pedal all in one that creates realistic human vowel sounds and some great tones.

Of course if you want to try singing words with your guitar solo in the vein of Peter Frampton on “Do You Feel Like We Do,” then you’ll need to get the real thing. But the Talking Pedal really does well if you’re more about adding that fuzzy vocal character to riffs and leads, like in Aerosmith’s “Sweet Emotion” or Richie Sambora’s part on the intro of “Living On A Prayer.”

One thing I noticed about the Talking Pedal though is that it takes a few minutes of practice to really get it right. You don’t want to just rock you’re foot back and fourth like a wah pedal. Actually, doing so produces a more wah like sound, which is fine but doesn’t utilize the pedal’s full potential. There is a lot of subtlety in the Talking Pedal’s entire range of motion that’s worth investigating.

In the heel position, the effect adds a kind of “ow” vowel sound while the toe position is more like an “ee.” The transition between vowel sounds from heel to toe is very gradual and smooth. And let’s not forget there are two notch filters at work here too, and therefore two “sweet spots.” One such spot can be found when rocked forward from heel to toe at about 40% and has a real deep cut in the low frequencies. The other spot is at about 80% and has a nice nasally mid-range boost. I think finding those two spots and working small sweeps in and out of them is the key to creating realistic talk-box effects.

The fuzz effect is also a great addition to this pedal. The Talking Pedal does not sound good running into a distorted amp; the nuance of the vowel sounds and filter effects get washed out and muddied. The fuzz effect allows you to add some grit and sustain to the tone, without ruining all the other qualities. I found that the fuzz turned up to 10 can be a little harsh if your amp is cranked. Luckily EHX was smart enough to make the fuzz effect adjustable, so you can always dial it back or just run it clean.

Video Demo Of The Talking Pedal:

Talk boxes are cool, but they can be expensive and they’re a pain to set up at every gig. The Talking Pedal gets the job done with no need for a slobbery plastic tube and a microphone. It’s easy to use, built like a tank and because there’s no moving parts, it should last a good long time. The best part is the MSRP is a mere $121.20, much less than your average talk box. The Talking Pedal is a neat and handy addition to any guitar player’s effects arsenal.

Vowel sounds aren’t too decernable until you put the fuzz in. Then they come on better.