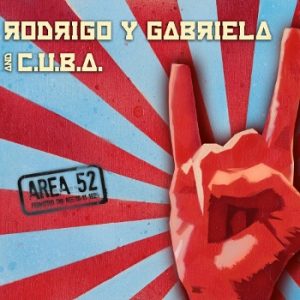 Guitarists Rodrigo Sanchez and Gabriela Quintero, a.k.a Rodrigo Y Gabriela, have a new record titled Area 52. They’ve taken some of their older material and re-imagined it with the help of a thirteen piece Cuban orchestra and legendary producer Peter Asher. Fans of the acoustic Mexican duo already know the power they generate with Gabriela’s percussive rhythm playing and Rodrigo’s soulful rock inspired melodies. With the addition of the Havana band C.U.B.A., their compositions take on a whole new life and a wider sonic vision.

The compositions “Santo Domingo,” “Hanuman,” and “Ixtapa,” burn with a grander scope and flood the listener with dreamscapes of Latin America and contagious rhythms. Traditional sounds seamlessly blend with the contemporary, as wah-wah laden guitars intermingle with jazzy arrangements, sudden dynamic shifts, acoustic Latin-rock soloing, and the ever-present clave. “Hanuman” mixes bombast with the soulful. The tempo shifts and lead guitar work are reminiscent of Carlos Santana. You can’t help but dig the sitar on “Ixtapa.”

“11:11” departs from the other compositions with its fusion of dreamy soaring lines and melodic counter point, but returns home with rhythmic chanting sung in Spanish accompanied by hand claps. The record is a journey through the varied sounds of Latin music, complete with sassy horn breaks and ultra fast piano lines. It’s a guided tour from Miami’s Salsa clubs to the small villages where rhythm is the heartbeat to life itself.

Area 52 marks the first time Rodrigo Y Gabriela have collaborated with outside musicians on such a grand scale. While they have had guests in the past such as guitarist Alex Skolnick from the band Testament – this new offering really ushers in the talent. This collaboration also confronts critics who have said that their earlier albums lacked harmonic complexity and cultural authenticity. They have never called themselves a traditional Flamenco duo, and in their hearts of hearts they are true metal heads. At its core their style of music is rhythmically based “Latin sounding” music with melodic rock based acoustic shredding. With the addition of the band C.U.B.A, Rodrigo Y Gabriela really soaked up the Cuban vibe, giving this new record plenty of ethnic flavor.

You will hear hot percussion breakdowns in the tune “Diablo,” plaintive piano and acoustic guitar interplay on “Logos,” and big ballsy horn arrangements on “Juan Loco.” Rodrigo goes all Al DiMeola in spots but pulls it off without sounding like a clone.

Overall the production is lush yet clear, and devoid of any heavy producer thumbprints. The musicianship shines under the belly of the compositions making this a great record for those who love contemporary Latin flavored music with virtuosity.

Those unfamiliar with Rodrigo Y Gabriela’s earlier work will more than likely appreciate this record more so than the well initiated. The charming and stripped down style of their earlier material loses something with thirteen badass Cuban musicians playing the hell out of their instruments. Still, you can’t blame a band for pushing their art forward, and with Area 52, Rodrigo Y Gabriela are doing just that.