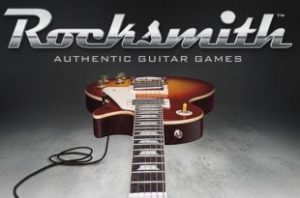 There’s been a void in the market ever since Activision announced they were pulling the plug on their once popular Guitar Hero franchise, back in February this year. Rocksmith, planned for release in October by Ubisoft, aims to fill that void with a fresh new approach: it’s the first video game of its kind that lets you use a real life guitar.

This idea of using a real guitar instantly appeals to musicians who, like myself, had scoffed at the idea that tapping buttons on a fake plastic toy guitar was anything like playing music. But the makers of Rocksmith aren’t just trying to appeal to experienced guitar players, they want beginners to pick up the game too.

Developers of the game claim that anyone could plug in their guitar and start to play and have fun, stating on the Rocksmith website, “Our game adapts to your personal skill level in real time, making it possible for you to play and have fun. If you’re a beginning guitar player, the game will treat you as such, and constantly challenge you to improve without overwhelming you.”

So could Rocksmith possibly produce a whole new generation of guitarists who learned how to play without a teacher?

Perhaps, but I remain skeptical, myself a long time guitarist and guitar teacher. I believe there’s no substitute for one on one private lessons when it comes to learning an instrument. But for those who can’t afford private lessons, Rocksmith may be a good way to get started.

To demonstrate how the video game works with beginners, Ubisoft produced two YouTube videos called The Beginner and The Gamer.

The videos show how Rocksmith starts a beginner off with single notes and simple rhythms, and then gradually adds more to the song as the player progresses. There is no indication, however, of how the video game addresses important things like tuning the guitar, playing with proper technique, learning scales, chords, etc. But Ubisoft hasn’t revealed all the game’s details yet. We may just have to wait for its release to find out.

As for the more experienced guitar players, Ubisoft is confident that they too will have plenty to learn. With an initial track list consisting of 50 songs from artists like Cream, The Rolling Stones, Stone Temple Pilots, and Nirvana, even an advanced player could have fun learning new tunes for hours.

Rocksmith is available for purchase, as of October 18 for Xbox 360 and PS3 systems.

Rocksmith definitely has the potential to be way cooler than Guitar Hero or Rockband ever was.

The question is, can Rocksmith be more than just another video game that eventually fades in popularity? Will this game turn guitarists into gamers, gamers into guitarists, and complete beginners into bona fide musicians? Only time will tell, but I may just have to buy this game and find out for myself. When I do, expect a full review. See you then.