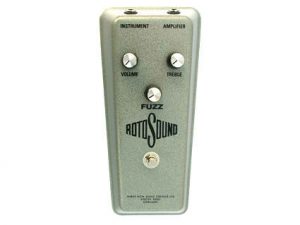 The RotoSound Fuzz pedal is a modern day reincarnation of a pedal lost to the sands of time and practically believed to have returned to the dust of the earth, it’s so scarce. Until now anyway. RotoSound has successfully recreated the fuzz pedal of the 60s.

The re-issue is based off the Tonebender circuit and uses active components that use germanium stock to keep its sound accurate to the original version. The Fuzz knob is a compensated transistor that dirties the signal up to make you grit your teeth or backs it off enough to soften the blow. The Treble knob rather than simply adding and removing highs controls the ratio of highs to lows. And we all know what the Volume knob does.

The pedal’s vital organs are preserved in a resilient pressed steel case with a gloss silver hammer powder coating much like the original. It’s slated for widespread release later in the November to December time frame for an MSRP price of $379.

The Tonebender circuit has been among the most influential circuits to build a distortion pedal around. It was first sighted in Gibson’s Maestro Fuzz-Tone pedal that was made famous when Keith Richards used it on “(I Can’t Get No) Satisfaction”.

Once those wheels were set in motion the demand for a gritty guitar has only expanded and the Fuzz-Tone was everyone’s starting place to see what to do. Variations have been sighted in the famed Arbiter Fuzz Face pedal and EHX’s Big Muff Pi and amps and pedals by VoX and Marshall.

Some time ago back in the 60s when fuzz pedals were young and revered as the next big thing even a string winder like James How couldn’t resist their alluring grit and charm. So he jumped face first into the market and developed a number of prototypes, but they never quite made it to the mass production line and thus their numbers have been incredibly limited and scattered.

A few years ago one collector of pedals had been in touch with RotoSound about his owning one of these elusive treasures and he sent it back to them so they may perform a proper autopsy on it and thus reproduce it and bring it to the numbers that threaten the galaxy.

The England-born RotoSound saw its advent way back in the late 1958. The founder was James How, an engineer by trade and a musician to boot, who designed his own string winding machines and began winding round wound bass strings that contrasted with the flat wounds that dominated the industry at the time.

Come RotoSound’s plot twist of 1994 founder James How had passed away while the company was in less than desirable circumstances. His son and heir Jason How flooded a car with strings and hit the road in a daredevilish attempt to reverse the path RotoSound had been going down. Since that was two decades ago and we’re talking about the company’s innovations now it’s safe to say he succeeded.

Since then the company as adapted to accommodate the requests of guitarists and bassists alike as well as orchestral instrument strings to produce just about any type of string one could yearn for with such endorsees as Billy Sheehan, Michael Amott, Guthrie Govan, and Geddy Lee to name a few, and now it looks like they’ve got their foot back in the door on pedals.