Schecter is a brand that has demonstrated that the employees behind the name know a thing or two about building a guitar. Being the owner of a Schecter, myself, I’ve watched their production over the years and even have them on my list of brands to test out in my search for a seven string guitar. Today, however regretful this fact may be, is not the day that I put one of their seven stringers to the test. Instead I’ve returned to my sanctuary for solidarity from the entropic environment of the real world only to be greeted with pictures and a matching press release for Schecter’s Blackjack SLS C-1.

Now I’ve read my fair share of releases on guitars, if you can believe that. Of all the guitars, few models, nice as they may have been, have had me willing to reconsider what plan to do with all the lunch money I’ve been saving up. Of the top of my head the SLS C-1 is in the top three. Possibly even the title-holder of the coveted number 1 spot in that debate, though that’s a whole different discussion.

The SLS C-1 Under the Microscope

The Wood and Hardware 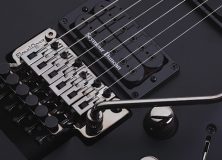 Schecter’s new Blackjack is easily primed with the heavy metal guitarist in mind. It uses a lot of choice details that have become staples for years within the genre. A mahogany body sets the foundation with a maple neck and an ebony fretboard. While it’s not exactly a revolutionary combination of woods, it has been tested by many guitarists and has proven to be quite reliable in getting a deeper sound.

The full model name is the Blackjack SLS C-1 FR-S. The FR part stands for Floyd Rose – one of the standard features on the guitar. However it’s not the only alternative for the bridge. Apart from a Floyd Rose 1000 Series tremolo a TonePros TOM bridge is also available.

The SLS C-1 is available in Crimson Red Burst and Satin Black with an MSRP of $1,499.

The Pickups and Electronics

Speaking of combinations to aid in that heavier sound. The SLS C-1 takes a set of Seymour Duncan humbuckers around for a spin. The role of the bridge pickup is fulfilled by an SH-10. The SH-10 is described as being apt at delivering treble as well as lows. More than likely it’s designed to handle vast quantities of distortion with lots of highs and lows, and scooped mids. A proper design for the modern riff master.

The neck pickup, on the other hand, is the Sustainiac. With a name like the Sustainiac I feel like its strength is already divulged, making my literary build-up a big waste of time. The Sustainiac is a switch-activated humbucker that in one mode deliver tones much like other humbuckers. However when you flip on one of the switches by the bridge the Sustainiac kicks on electromagnetic feedback that will sustain your notes until kingdom come. In short the guitar comes with the powers of an E-Bow built right into it.

This is a feature that is probably even more valuable these days than it’s ever been before. Back in the day guitarists had to build a relationship with their amp, so to speak. They had to learn how to use the feedback for the sustain they were after. The E-Bow initially offered an alternative to that, but I don’t know that sustain was as much a concern as it is now. As of this writing I’ve spent more recent time with headphones on and plugged into my POD. Endless sustain just doesn’t come that way. The Sustainiac is a solution to that concern.

The other switch, lest we leave that one out, will toggle harmonic modes within the Sustainiac that will blend various harmonics in with your signal.

You can find out more information at Schecter’s web site.