Searching for the Seventh String: A Quest for a New Guitar

Part 1: The Journey For a New Guitar Begins

I deliberated carefully on what I expect from my next guitar. For instance. I like a wide range of music, but whenever I bust out my guitars I usually gravitate towards heavier styles. Another concern stems from my general disinterest in tuning down. I do like the deeper sounds and I love that deep heavy metal style, but there is just something about the feeling of down-tuned strings that just doesn’t work for me. The string tension isn’t the same and no matter how I set my guitars I just can’t seem to get that feeling like a guitar set and tuned for Standard E.

So considering those factors a 7-string guitar seems like a logical conclusion. I get that lower sound without losing my preference for standard E tuning. Having come to that relatively simple conclusion, I swooshed out to my nearest Guitar Center and sampled some of the 7-stringers they had in stock. Unfortunately the stock was fairly limited at the time, but since I wasn’t planning on buying on the spot anyway this was no real concern to me. I wanted to take some time to dwell reflect on my experiences anyway. Plus since I just happen to have this web site at my disposal I’ve taken it upon myself to document my experiences here.

While I was at Guitar Center I came across two different models. An Ibanez RG7421 and an LTD M-17 tested through a Marshall MG10CF. Sorry about the stock photos, by the way. Evidently I’m still learning how to use a camera. The shots I took were… not good. I’ll do better next time.

The Obligatory Section on Budget

When I finally addressed that I was in the market for a new guitar I considered my budget.  This article covers some of the more inexpensive guitars on the market (as will some others), but by no means am I specifically just testing out very affordable guitars.  For me this isn’t so much a pursuit of a guitar for the right price.  It’s a search for the right guitar.  The only fiscal limitation I have is if the right costs $1,500 then it’s more than I want to spend. 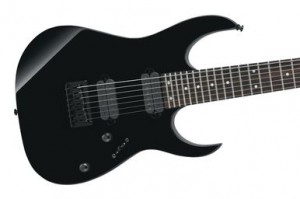 The RG7421, clocking in at about $350, featured their trademark Wizard II-7 maple neck with a rosewood fretboard along with a basswood body. It also used a set of AH-7 humbuckers.

Now that that’s out of the way. The first thing I zeroed in on was the feeling. It was a much different feeling from any of the guitars I own. The neck felt like it had a thinner finish. Less overwhelming to the sense of touch and more wood-like. It took me a bit to get used to as my guitars have a much more generous finish. The extra width to the neck also threw me off for a moment or two, but once I got past that I had no trouble putting the guitar through its paces.

I like picking up the pace and getting into the shred thing, but by no means am I Yngwie Malmsteen. I like a nice, fast neck, but my needs for speed aren’t as high as some guitarists out there. For as fast as I like to play the neck’s build was just fine and the string action was low down where I like it. Probably around 2/64”. I was able to shift up and down the neck just as easily.

The sound was deep (not to state the obvious) and a bit on the warm side. The cleans were a bit murkier than I prefer, but the guitar handled distortion really well.  One thing that did set this particular RG7421 apart was the 5-way pickup selector.  I’m more accustomed to seeing things like that on guitars with three pickups.  Not two humbuckers, so that did offer a bit more tonal variety.  Each option was distinctly different from the others, and it’s always fun playing around with different pickup selections.  I’ve always enjoyed that middle pickup on a Strat, for example.  While this by no means sounds like a Strat, these pickups do get a similar type of sound.

Next up is the LTD M-17 which runs a fee of about $200. Doing the basic specs thing, the M-17 is a basswood guitar with a bolt-on maple neck and a rosewood fretboard. It uses a set of ESP designed LH-107 humbuckers.

The most immediate difference the M-17 presented was its setup. It had a brand new set of strings nicely set up. It was obvious this particular guitar was a more recent addition to Guitar Center’s stock than the Ibanez was. Hell the paint finish barely had any traces of fingerprints so this thing probably arrived within the week or so. This little detail made my comparison a tad weighted.

The neck had a finish on it that felt a lot more like my Strats. It was a bit thicker than the Ibanez and offered a much more familiar feeling. I don’t want to say it felt necessarily more or less fast on the M-17. I never felt inhibited from playing my routine style. The action was about as low, the width of the neck was the same.

As I slid my fingers across the fretboard the differences, albeit subtle, did start to come out. The LTD had a hint of brightness that did still ring through. Even beyond that bit of extra spank the fresher strings had. This brightness translated over the distortion. Considering the condition of the strings I tried to be objective while playing and envisioned how it would sound without that sparkle. I imagine it would gradually sound closer to the RG7421, though I like to think it would retain a tad bit of the brightness.

If I’m to be honest though it was really difficult to isolate the differences. The materials used were almost completely identical. The sound and feel are usually what it comes down to when comparing guitars and soundwise these two were not as dramatically different as, say, a Stratocaster and a Telecaster. There was a difference, though it was small enough that I could learn to love either one.

However it was more so the feeling that had the bigger impact on my preferences. I much enjoyed the familiarity I got out of the LTD, though I like the idea of trying something different. I don’t aspire to be so on the fence, but after my experiences with the two I could take either one and be about equally satisfied. The only real draw for one over the other insofar has boiled down to the price difference. The LTD could spare me $150 to carelessly blow on an effect pedal or something of the stort.

Fortunately I am in no rush to make a decision and there are plenty of other 7-string models out there to try out, so you can expect more from me on this.