Shahyd and His Legacy

Shahyd Legacy is a rock guitarist that’s been active in the industry since circa 2004 with his then band SYN. A few years after SYN he went on to form his band Sacred Legacy which would lead to his solo project with The Sacred Legacy debuting as his first album. 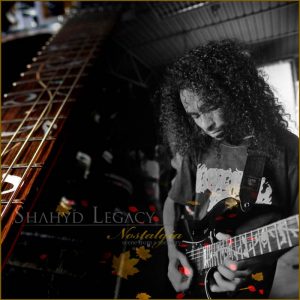 Fast forwarding six years later, Nostalgia is Legacy’s soon to be released sophomore album. The thirteen track opus is an amalgam of everything you could hope for and expect out of an instrumental rock album from the somber and subtle songs to the loud and energetic metal side of life to a few vocal tracks thrown in to add a dash of variety.

Listening to Nostalgia you can tell he writes from a point of many influences, but you can also tell it’s not an album where he sits around and tries to recreate what his influences have already done. Quite removed from that, actually. Nostalgia if anything defines not just where Legacy is as a musician but as a person as he seeks to imbue the album with as much of himself as possible. Therein lies a point you could infer from reading the track list alone as each song title implies the incentive of some deeper symbolic meaning from the opening “Once Upon a Time” to the closing “Epilogue”.

The music is ambitious for sure, and while I haven’t heard The Sacred Legacy in its entirety, it shows that Shahyd Legacy has spent the time between albums broadening his horizons and thus resulting in a greater variety in the style he plays.

He’s as technically proficient as they come and he doesn’t shy away from demonstrating just that on songs like “Final Destination” which I would recommend to any fan of the Mega Man soundtracks or “Orchid Sanctuary” that hits the ground running off the bat and ranges from a flourished, shreddy solo to subtle two or three string sweeps or slides that season the listening experience as opposed to dominate it, all of which is coupled with a lot of guitar harmonies.

But that isn’t to say the whole album is like that. “Destiny”, while still showcasing the more advanced uses of techniques and shredding, really doesn’t make it a big part of the song until the end, and even then it’s still not so overwhelming that the core of the song gets sacrificed.

The album changes pace plenty of times throughout ranging from the aforementioned heavier songs and gradually down to songs like the more ballad-like “Glimpse of Hope” and “Your Heartbeat in My Pulse” that show Legacy’s down to Earth side, the latter of which doesn’t even use distortion, but rather the warm, thick tone of his guitars.

From a performance point of view the whole band’s performance is tight and in place. The more demanding songs don’t seem too formidable for the band to plow right through, and on a few songs some guest singers show up and to their credit they deliver a solid performance. From a production point of view the sound is crisp, clear, and comes through swimmingly. Independent groups don’t always have the luxury of getting good quality production and what’s demonstrated on Nostalgia is better than some groups I’ve heard that are supported by a label. It sounds fluid, natural, and best of all like a group of guys playing music.