Sorry to leave you hanging in the oil-soak phase last time but, editorial requirements are sometimes a priority. So, let’s pick up where we left off…

Scrub down your bridge plate and tremolo block. Those three big screws toward the rear remove the block for cleaning or replacement. Note in figure 12, how the pivot edges on the plate fit into the grooves on the studs. 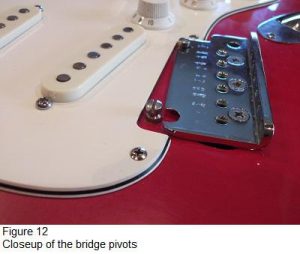 As figure 13 shows, you are looking for vertical play, although you shouldn’t have any play. This is a “floating bridge” (like a Floyd Rose) and should not contact the body when properly adjusted. The stud height check requires that the plate be against the body and the plate pivot points be firmly seated in the grooves on the studs. The plate should be in full contact with the body, not high in front , back or sides. Raise or lower the studs to achieve this. I know that adjusting a floating bridge by making it touch the body is contrary to common sense, but it is the right thing to do. 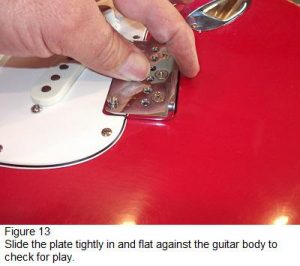 Figure 14a shows the bridge working on my guitar. Notice the gap at the front of the plate.

Figure 14b shows another angle of the same conditions as figure 14a.

In figure 14c, the bridge won’t lay flat against the guitar, which it should if it is adjusted right. I adjust my bridge just a tad low because I like it there. It took 20 years to perfect this setup on my guitar and I am so used to it that most new Strats feel strange to me. The exception was that Select ($2,000 + change).

I like low action, but I also like sustain in my tone from the guitar, something the Strat is not truly great at. (The reason why the rumor mill has it that Eric Clapton blocked the trems on his old Strats – more sustain.)

George Blanda, Chief Engineer of R & D at Fender, and designer of the this tremolo says to set the studs so the bridge plate is 3/32″ off the body all over and make the neck match the bridge by adjusting the Micro-Tilt neck. This takes the wood-to-wood contact out of the neck joint, in my opinion, reducing the already lackluster sustain. (The neck would only contact the guitar body at the very top of the pocket and through the tilt adjustment screw. There would be very little solid contact between the neck and body.) I don’t like this idea at all but that’s not to say that you can’t do that if you want. Fender’s setup instructions on line say to use my method. So who’s right? Everybody!

My bridge is 3/32″ off the body at the back when set up, as you’ll see later on, to keep everything as close to the body as possible. I like the tone in that position. All things considered, Christine will sing, growl and bite the way she is set up. Your setup affects the tone of your guitar. Longer studs mean more harmonic resonance for a tone with richer harmonics as everything vibrates when the strings vibrate. (Otherwise, clip-on tuners wouldn’t work right?)

I know you’re saying, “More harmonics mean a more complex tone!” Yeah, but it’s also more wimpy in that it doesn’t have that blast-through-the-mix tone. It’s one of those subjective things that you like or hate. Your choice. This is just my opinion, guys. If you like that tone, go for it. I’ve said it before, there is no right setup.

Use any small tool that has a hook-like end, see figure 15, even a small wire will work. You are going to insert it into the string holes and feel for a catch edge on the bridge plate. Removing the block will let you see this area directly and smooth it up if you need to. If you have a string breakage problem in the bridge, this is the likely cause.

Figure 16 shows the way to do this. If you find a burr, use a round file to smooth it up. It is not necessary for the holes in the block and the holes in the plate to perfectly match. The transition just has to be smooth. 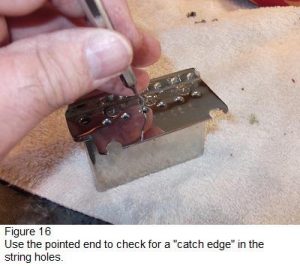 We’re ready to assemble the bridge. (Now is the time to install those graphite saddles or brass trem block you’ve had your eye on.)

Fish all your parts out of the oil bath and lay them on a towel to drain. I soaked the threaded end of my trem arm, too. The new (2012+, I think) arms aren’t threaded so a drop of oil later will take care of them.  Roll the pieces around on the towel to remove as much oil as you can. You’ll notice this stuff is sticky to the touch. 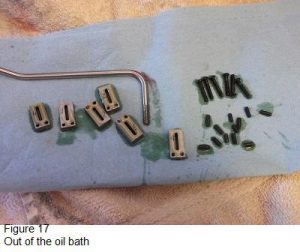 See figure 18. Reinstalling the intonation screws, will push the oil in those holes back along the threads… no problem.

Note the spring length difference in figure 19. The shorter screws go to the thicker strings, typically the low E and A. They are more compressed because those strings need to be longer for intonation.

When you reassemble the saddles to the bridge, bring them down until the spring is just applying tension to the saddle. If you know your neck radius at the heel, you can set the saddles to that radius but it is very hard to get it close without the strings on.

Once you have the bridge assembled, break out the “Dawn” and wash all that sticky oil residue off your hands. Wipe down the bridge to get as much off as you can but I promise it won’t stay sticky.

Our next step is to get the bridge in place. Follow the directions in figure 21 to make it easy. The claw should be backed out enough that you can put the springs on by hand.

We have a couple of things to do before we put the strings on so I’ll let you contemplate those until next time… when we dive into the “Forbidden Innards” of the guitar. Ha, Ha, Ha, Haaaa…

Intonation off?  We’ve got you covered.

You have nerves of steel. I’ve never met a guitar I didn’t think I could screw up (I barely made it out of shop class alive). Glad some of us are more adept at the mechanical end of the spectrum!