Simple Guitar Repairs: How To Align A Bolt On Neck

I spent several years, back in the ’80’s, refinishing, rebuilding and repairing guitars. As an accomplished woodworker with a full production shop at my disposal, and, being a guitar lover, this seemed like a natural progression to me at the time. Unfortunately, I had to keep up with making a living building cabinets and furniture so the guitar “business” never really got off the ground. I did gain lots of experience, though, and since my thinking is that guitar players should know about their instruments, and be able to maintain them, unless you have the luxury of your own private guitar tech, I would pass on some of what I learned.

This is a pretty common problem on Strats, Teles, Ibanez, Jacksons… any guitar that has a bolt-on neck. It’s a simple adjustment but it does require some knowledge of the guitar/neck attachment and how it works. You would think that the design of these guitars would eliminate any error in their assembly, being as how both the bodies and the necks are CNC (Computer Numerical Control) produced, and made to pretty exacting standards. Well, not necessarily so, as you’ll see…

Figure 1 is my Ibanez G10. While doing a routine inspection on the guitar, I came across figure 2. 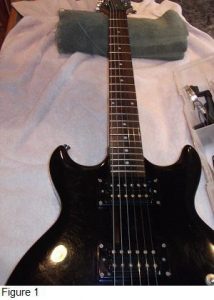 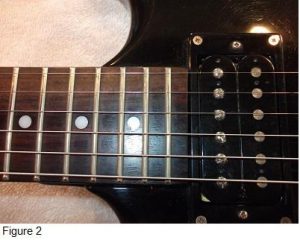 Look at the distance between the high E string and the edge of the fretboard at the 22nd fret. Now look at the low E string at the same fret. See the difference? This is fairly common with mass produced guitars and was probably within specs at the factory as the guitar plays very well, which would be the main criteria. My first reaction to a guitar is its playability. If I don’t like it, then I look to see why it doesn’t play well.

Figure 3 shows about 3.5mm from the side of the fretboard to the high E string at the nut. 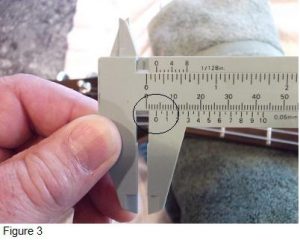 But a whopping 5mm at the 22nd fret! There is definitely a problem. 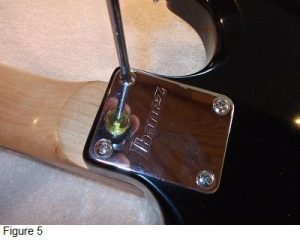 The first order of business is to be sure there isn’t something else wrong. If you don’t find a broken or improperly placed bridge, which should show up in playability, the neck is our prime suspect.

Detune the A, D, G and B strings down to slack, or remove them entirely. Tune the two E strings down to the point just before they lose tension… you need them to be straight so you can use them as a gauge.

It didn’t make any difference to my guitar. In figure 6, I had to jam a feeler gauge in beside the neck to hold it in place. Having this tension on the neck is not good. We want the neck to sit in place comfortably and not fight to return to a comfortable but wrong, position. Since I have new strings on the guitar, I loosened them enough so I could pull off the stop bar and get the strings out of the way. Then I removed the neck screws. 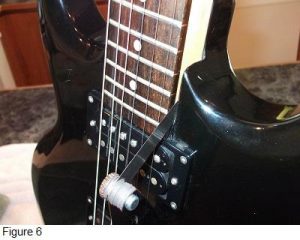 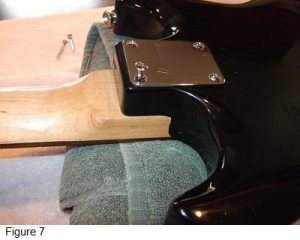 Loosen all the screws little by little until you get the joint tension off. After that, you can just remove them. Be aware that the neck will fall if you support it as in figure 7.

Low and behold… what have we here? A shim! That was unexpected but I’m not surprised. Figure 8 shows what I found under the neck. There are several reasons for this, the most prevalent being extra finish on the end of the neck pocket that didn’t get removed so the neck won’t fit the template without a shim. What? See the big black spot on the body right next to the word “shim” in figure 8? That’s a hole, used to hang the body for painting. The neck covers it in front and the plate covers it in back… no harm, no foul. The whole neck pocket gets painted and when the guitar goes through assembly, the neck guy has to scrape the extra off to mount the neck. In order not to expose any wood or chip the finish, they don’t scrape it right to the top edge of the pocket. You can see the painted edges where the neck heel fits in as well.

It’s quicker to just toss a small shim in there to align the neck than it is to meticulously play with the paint to get the guitar to fit the design template (something that measures the neck to body angle) so the rest of the guitar will go together properly. After all, the neck guy is probably on a quota system and can’t waste time “hand making” this guitar. I’m willing to bet that you’ll find a shim or two out of the custom shops, too. 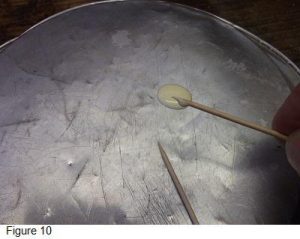 Put a dot of wood glue on something it won’t stick to and use a toothpick to grab just a dab of it and glue down the shim, unless you are a glutton for punishment and want to work the pocket so the neck fits better.

The typical neck screws are about 1.5 to 1.75″ long and about a #8 in diameter. You can see by figure 11 that they are threaded into the body as well as the neck which accounts for the neck not wanting to move. So, we need to relieve the body holes so the neck has some play. 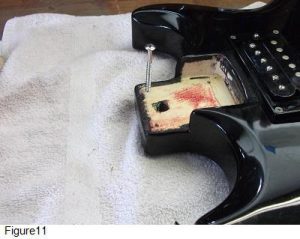 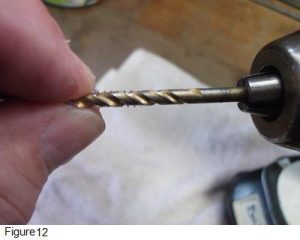 We want to remove most of the threads in the body but we’ll leave just a tad there. We don’t want too much play in the holes, just a little. Figure 12 shows the screw threads peeking out from behind the drill bit just a tiny bit. We’ll try this and we can always drill bigger if we have to. This 9/64ths looks like the right one, though.

We’re only going to drill the two bottom holes, as indicated in figure 13, and see how that works.
After drilling, clean out the pocket and reinstall the neck. Snug the screws up, and restring as before when we measured the string clearance. You can leave all the strings off except the two E’s, just in case you have to drill more. 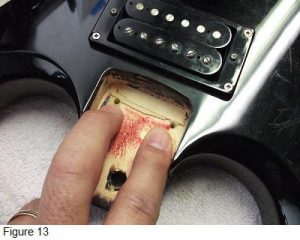 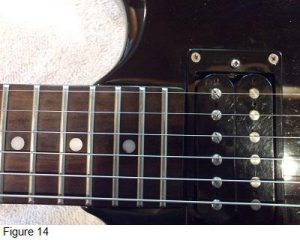 A touch over 3mm at the nut. That’s a good sign. 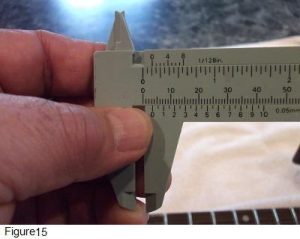 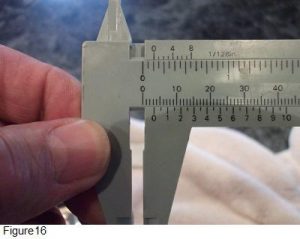 Tighten the screws slowly and evenly, so you don’t move the neck. When they’re tight, recheck the measurements to make sure the neck didn’t move. Now, you need to do a set-up on the guitar: truss rod adjustment, string height (action), intonation, pickup height adjustment. Don’t know how to do that? No problem… I’ll be covering all those things in the near future. Stay tuned, right here at Guitar-Muse, the site for complete guitarists.

great article. My neck (Ibanez 1910) turns out, is cracked. Must have been dropped, then repainted, it appears. It makes me wonder who would refinish a guitar that has a crooked neck! I suppose it’s possible the neck twisted itself cracked, too… it is very twisted. Looking for an Ibanez neck I guess, next.