You Don’t Always Get What You Pay For

Let’s say you have a few hundreds laying around. Maybe you finally got that job your mom has been yelling at you down in the basement to get so you can move out and you’ve just got your first pay check. What should you do with it? Blow it all on gear of course. But what? Should you get one big, pricey chunk of gear? Or should you get several more affordable pieces? Though the debate between quality vs. quantity will wage on you can still get by with surprisingly good quality without sacrificing quantity. In some cases even more affordable equipment can outdo the expensive alternatives.

I do have a sort of criteria I’m following for this. Anything included has to cost under $100 and by a margin I have played by ear based on my opinion of the bang for buck ratio. I also have to have had some sort of personal experience with the pedals I cover, so if I seem to overlook something it’s because it’s outside my intellectual jurisdiction. 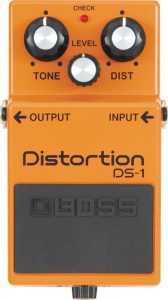 Hands down my favorite distortion pedal on the market, the Boss DS-1 is reliable, tried, true, and in my opinion that is so ingenious that it qualifies as a fact it sets the bar for distortion pedals. It used to be a bit less expensive than it is now, but it’s since gone up to $50 which is a bummer in that it hurts its bang for buck ratio, but it’s still damn reliable and still very competitively priced compared to a lot of distortion pedals that don’t carry the same history.

It’s a simple to use pedal with a gain knob, a volume knob, and a tone knob. While it can offer a bit of noise to it depending on the setting, it’s a very versatile pedal that can get overdrive, distortion, and (with the assistance of a guitar tone knob) something more akin to a fuzz sound. Plus if you go for a used pedal you can probably get it for about $20.

I was even nice enough to include some slightly pricier alternatives for you. Wasn’t that sweet of me?

The EHX Metal Muff is another distortion pedal that I couldn’t personally praise enough. Granted the marketing angle skews the demographic available, but it’s easy to tweak for things other than just metal. As an alternative to the DS-1 for $69 it’s solid, durable, and has a pair. It has volume, tone, and distortion controls, and the Metal Muff series has always prided itself with the top boost toggle switch for an extra boost in highs.

EHX does have a Pocket Metal Muff available, but it’s only $7 less at $62, so unless you have specific reasons for leaning towards that like space concerns, I’d just suggest getting the bigger version.

Danelectro’s Fish and Chips EQ has earned itself a reputation over the years as being a great sounding EQ pedal for the very affordable price of $30. EQ pedals generally lend themselves to a bit of a learning curve to get the sound you want, so you can expect to get that here as well with all seven bands to tweak for a boost/cut of 15 decibels and volume boost. The drawback? The build. The chassis is plastic so its lifespan is already at a disadvantage.

An energetic enough stomp could possibly be a death sentence. Perhaps it would fare better as something to hold you over until you can get an upgrade. Or you do what a friend of mine does and just buy new ones as you go through them because you just can’t find anything that matches it in sound quality.

I have to be honest. When I dove into MXR’s equalizers I just went straight for the throat and got their 10-band M-108. I’m making an assumption that the 6-band M-109 is the same thing only on a smaller scale. Since I love my M-108 I feel confident in recommending this pedal. At a meager $70 I’ll give it the benefit of the doubt and say give it a look.

The Dunlop Cry Baby is like the DS-1. Its name carries weight. History. Its is a name that we will sing when we march. It’s a simple design that has been around for decades, it’s effective, it sounds great, and in the scheme of wah pedals it’s still among the most affordable out there at about $70. There really isn’t anything else to say about the Cry Baby. It was a trendsetter when it came out and it’s been around ever since for a reason.

The Weeping Demon is $80 making Ibanez’s own twist on wah effects $10 more than Dunlops. It boasts intelligent product design with Ibanez’s “Push-Lok” knobs so you can go nuts with your big feet on the pedal without ever accidentally twisting the knobs along the way. Soundwise it will get you a good, thick, clean wah sound.

Compressors are strange pedals. Their function is so simple and yet so influential. I’m not going to name names, but some compressors out there just plain suck (and I’ve returned them all). Some add all sorts of noise or heinous popping, so finding a good compressor at an affordable price can be challenging. Enter the M-102 Dyna Comp compressor. It’s sturdy, reliable, and won’t demolish your sound. It uses nothing more than two knobs, one for output and the other for sensitivity, so tweaking it shouldn’t take you too long to figure out.

Compressors are the type of pedal that gets expensive really fast and at $70 it’s one of the few compressors under $100 that’s worth the time of day.

It’s apparently time for some MXR fanboyism. It costs about $10 more than the Dyna Comp at $80, and adds an attack level knob to the output and sensitivity. At this point I could pretty much just copy and paste the Dyna Comp summary here as well. What you’re paying for what you’re getting, it’s going to keep you in the ok at least until you have a couple hundred dollars saved up for something higher end. 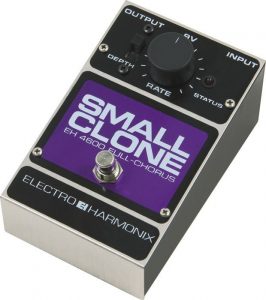 This far in it’s kind of funny just how many older pedals have been around as long as they have and still retain an affordable price tag. At about $88 the Small Clone still carries its weight as a chorus pedal and uses nothing more than a rate knob and a depth switch. It has a nice, thick, warbling chorus sound, and it’s arguably to chorus pedals what the DS-1 is to distortion pedals.

EHX also offers a Nano Clone now which is a smaller version with just a rate knob. I haven’t actually worked with it yet, so I’m breaking my rule a bit here, but at $47 there’s enough of a price difference to justify bringing attention to it. You may want to check it out yourself.

It seems I would readily put the most stock in EHX’s modulation pedals in a budgetary sense. Here we have the Neo Mistress flange pedal. A smaller, digital version of the Electric Mistress flange pedal. It’s right down to the point with a rate and a feedback knob to help shape your sound. It’s easy to tweak and the results are enjoyable no matter what. At $87 it’s among the pricier pedals, but such is the fate of modulation pedals that vary in quality and features much more than other types of pedals.

I went ahead and did the math. Were you to blow your whole paycheck on one of each category listed above you could get everything for $267 at the least expensive. At the most were you to buy every pricier alternative it would cost you $387. Considering there are pedals out there that cost more than that independently (and aren’t multi-effect pedals) that’s still pretty good considering it would get you a good arsenal of effects.