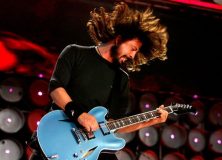 Have you ever wondered what a duet between Corey Taylor and Stevie Nicks would be like? Or maybe a performance with Rick Nielsen and Trent Reznor? Well you’re still going to have to imagine those precise combinations, but the closest chance to hear them is nigh.

The former Nirvana drummer and Foo Fighters front man Dave Grohl has pieced together a gestalt of a band that has come to be know as the Sound City Players, and now the makeup of this group has been made available to all. In addition to the obvious Dave Grohl the roster includes:

The album featuring this monster lineup has been titled Real to Real and will become a part of documented history on March 12th on Roswell Records.

The complete track listing will include:

This supergroup didn’t just form out of the mere ambition of putting together another Probot though. This time around Dave Grohl’s been working on a documentary that tells the story of the LA recording studio Sound City Studios which has become closed off for commercial use. The supergroup we’re discussing today was formed and developed the soundtrack for the documentary. It’s slated for release in February at the Sundance Festival as well as for video on demand for those that can’t make the trip out to the festival.

Bear in mind this isn’t the first time Grohl’s had a wild idea like this. Anyone remember his early 2000s album Probot? That was a well received metal album that essentially had the same core concept in mind. Get a whole bunch of respected musicians together and make a kick ass metal album. Back then his lineup included Cronos of Venom, Max Cavalera, Lemmy of Motorhead, Mike Dean, Kurt Brecht, Lee Dorrian, Wino, Tom G. Warrior, Voivod’s Snake, Eric Wagner, King Diamond, and Jack Black. With as well received as Probot was we can expect good quality results from this group as well, I’d gamble.