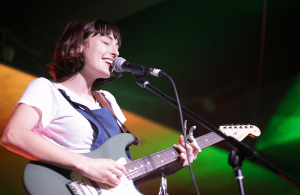 I’ve got to admit – the first time I heard Stella Donnelly, I was hooked. And I never get hooked like that. Maybe a couple times a year, and I do listen to a ton of guitar music. There was something about the woman herself, who so easily lets the girl out, yet can toss out some incredibly real and stinging lyrics. She can say what has to be said, without a glare or anger of any kind, and then a genuine smile as she tunes up for the next song.

Stella does know how to say what has to be said. She knows how to advocate for women, such as in “Boys Will Be Boys”, and she knows how to get people off her back, such as with “Mechanical Bull”.

All of this of course is backed up by a Fender Stratocaster, typically pretty clean, and without overt effects.

On her music thus-far, there isn’t much accompaniment, you can find the occasional keyboard line, dancing with the delicately strummed Strat – like in “Talking”. You don’t get many drums, bass players or other instruments chiming in.

The fact that she can keep my attention – both on Spotify and in concert is a sure sign of an artist that knows their craft, and what they want to deliver. Simplicity is definitely one of the things Stella is delivering.

Along with that simplicity comes an amazing voice, which is anything but simple. It’s like an angel singing about something you don’t want to think about. Its like a sharp cotton ball. It’s like … hard to describe. Stella pulls no punches and she delivers whats on her mind all wrapped up in a package that is easy, fun, and even beautiful to listen to.

Stella has gotten a lot of attention, considering that she released her first album, “Thrush Metal” not too long ago – just back in 2017. She’s moving fast, having already caught the attention of NPR and other major music media. We think 2018 might be Stella’s year!

I could blather on, but I encourage you to check out Stella for yourself – you can find her in all the usual places, including our Guitar-Muse Spotify Playlist, as well as her BandCamp Page where you can support her directly.

A few of my favorites from Stella Include:

Also check her out live on Youtube, you can experience the real live experience.