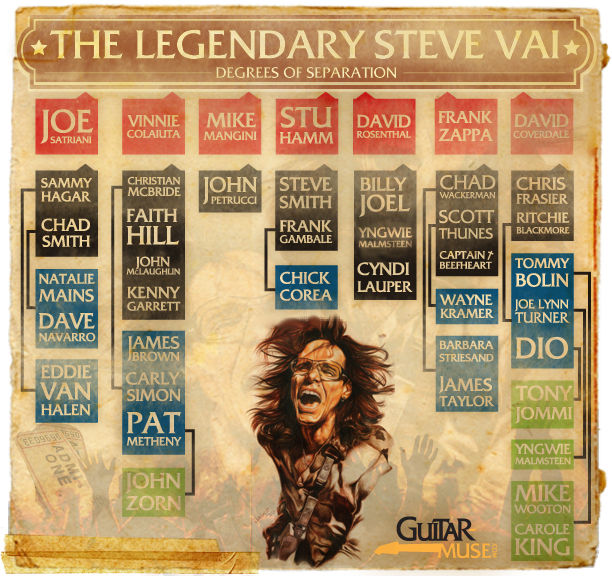 A few obvious names likely leap to mind: Joe Satriani, Billy Sheehan, Frank Zappa. And of course each one of those names connects to many other famous musicians.

Follow this web of connections outward by several degrees, and things get complicated quickly, especially because Vai has worked with such a variety of musicians–from world-class jazz bassists to Whitesnake.

Call up your friends at all hours of the night and day to test their Vai knowledge; say “Hey, betcha can’t connect Steve Vai to James Taylor in three degrees.”

Link them here to prove you were right.

This obviously isn’t a complete list because nobody has a monitor large enough to handle the chaos that would ensue. We tried to take the most interesting and surprising results from our research. Do you know of another? Let us know!

Credits – there’s a bunch here!
The infographic – Notify Design (Justin Floyd)
Research – Nicholas Tozier
The background image – (Hagop Der Hagopian Tlapanco) you’ve really got to see this for yourself in its original form – here
The original photo of Vai that inspired the drawing was taken by Michael Mesker, who was at the time exactly one degree of separation from Vai himself. Good friend of Guitar-Muse.com and great guy.