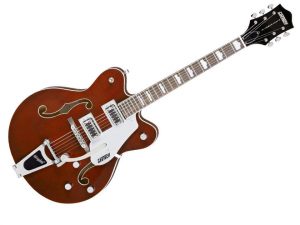 “In quick succession the Electromatic evolved into the Country Club, the Jet solid bodies were introduced and two of Gretsch’s best-loved models, the 6120 Chet Atkins model and the White Falcon hit the market.”– Gretschpages.com

Gretsch has gone back to the drawing board and reinvented a legendary classic, the Electromatic®. The result is a fresh batch of hollow body electrics, just in time for Summer NAMM.

A Bit of History

The Electromatic® is the axe that earned Gretsch its place among legendary guitar makers. The Brooklyn based Gretsch musical instrument company, which began in 1883, had been a successful family business long before the first electric guitar came along. However, as gretschpages.com explains, production of the Electromatic®, in the 1950s, marked the beginning of the company’s heyday.

According to the website, “Gretsch had dabbled in electric guitars prior to 1955, producing a limited number of Hawaiian lap steels and the Electromatic arch-tops, among other models, but around 1954 the Golden Age of Gretsch guitars began.”

The Electromatic® has remained a popular choice for players ever since. Gretschpages.com states, “Through the ’90s, the Gretsch line began at about $1,500, and by most accounts were very well made. In 1999, a cheaper series of Electromatic guitars also joined the line-up.”

After changing hands a number of times, including being owned by the Baldwin Company, Gretsch reemerged in 2003 as a joint venture with Fender Musical Instruments Corporation, which is where it stands today.

The Basics About the Electromatic®

Gretsch has refitted its renowned hollow body with some sonically exciting equipment. Take the G5422TDC double cut-away, in Snow Crest White, for example.

Vintage enthusiasts don’t have to worry about the characteristics that made this particular six-string famous. A maple neck with rosewood fingerboard and 22 medium jumbo frets is there, along with a very traditional gloss urethane finish.

Also present is that unique touch of Gretsch, with its gold hardware (on the Snow Crest White) distinctive hump-block inlays, stylized f-holes and Bigsby vibrato. There is no mistaking this industry favorite.

What’s New About the Electromatic®? 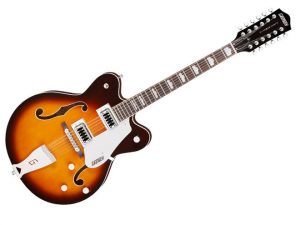 Gretsch has equipped the Electromatic® with “Black Top” Filter’ Tron™ bridge and neck pickups. This was the equipment being used when Gretsch was owned by the Baldwin Company in the 1970s. In theory, though the guitars from the “Baldwin” years have attained a less then positive reputation, Gretsch went back and tweaked the pickups that were being used then. The effect has produced a powerful contemporary guitar with lots of “Fenderish” highs.

If that’s not enough, Gretsch has also introduced a left-handed single cut-away Electromatic®, in Aspen Green or Orange.

The new Electromatic® has a foot firmly placed in both the past and the present. Will it retain the same standing in years to come? We’ll have to see. Meanwhile, the proof is in the playing.