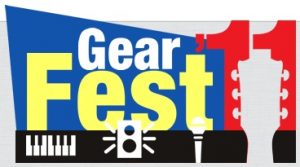 Proclamations from a nonlucid mind.

Ok, so GearFest is over and done.  I’m back home and thoroughly ready to sleep in my own bed for a night, but before that how about a dose of immediate thoughts?  Firstly.  What a blast.  There was a lot going on and unfortunately I didn’t get to see everything that I wanted to see, but what I did see made it a worthwhile trip.

I’ve been traveling a bit much (not just to Indiana), and I’ve had a cold for the past week, and as of this typing it’s about 11:00 PM and I’m quite tired, so I’m going to give you a quick summary while it’s all still fresh in my mind, and over the next few days we’ll organize and present to you what we’ve got in more detail.

Firstly the amount that was going on was pretty cool.  When it comes to music there are as many tastes for things as there are people on the planet and while the demographic of German Oom-pah enthusiasts may have felt a bit left out, I’m pretty certain that the people that did attend were able to find something that interested them.

If the fact that it was free entry alone wasn’t incentive enough to show up just because you can the some of the sales they were having were certainly worth it with most of them being over 50% off and some going as high as around 75%.

They had plenty of workshops and hands on courses over an array of topics from song writing to recording and mixing, and from gear demonstrations to straight up performances.  Plus the appearances of multiple established, legendary musicians certainly bolstered this event up to something worth talking about what with Alan Parsons, David Ellefson, and Frank Bello being there to tell us all how it is.

My favorite parts in not too particular of an order:

Fab Dupont’s demonstration on mixing.
Greg Koch’s demonstration of Fender’s  Pawn Shop guitars.
The brief talk I’d had with Johnny Hiland and Ron Lutrick.  They set the bar for nice guys.
Dave Weiner’s performance with PRS guitars.
Buying $180 software for $50.
Sweetwater’s kick ass staff.  I can’t go without mentioning how helpful they were.  I didn’t need a lot of accommodations along the way, but when I did it was what you’d hope for.  Chris Guerin rocks and should give Katie Stockman a raise.  314.618%.
The population of lovely looking ladies was also appreciated.

I know I’m being brief here.  We’ll be posting more in depth details later when I’m a bit more lucid to go through all of the footage and notes that I’ve got.  I started writing this at 11:00 PM and I’m finishing it at 1:00 AM.  So no I’m not watching videos right now.  It was a blast and I’m glad to have been a part of it.  There was a lot going on and a lot to see and I look forward to seeing what they do with next year.  All that’s left now is for you all to enjoy reading and/or watching whatever comes out of it.