The Aristocrats DVD Preview and Tour

An Appetizer of Things to Come 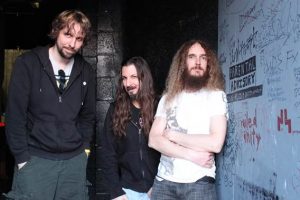 As the enthusiasm builds up for the upcoming new album Culture Clash (following the widely praised self-titled debut album) from the musicians extraordinaire The Aristocrats, a second DVD preview has been released via JamTrackCentral.com – a web site which guitarist Guthrie Govan has been a frequent and valuable contributor to. On top of the DVD preview, Jam Track Central also has a preview of each track off Culture Clash. Now you don’t need to wait a whole gruelingly long week for July 16th to come when the album is officially released. You can wet your palette with a sample to get you through the achingly long hours of each day.

The DVD preview mentioned above is an excerpt from a bonus DVD that comes included in copies of the Culture Clash deluxe edition. The DVD, entitled Accept the Mystery: The Making of the Aristocrats’ Culture Clash is a 33-minute documentary that was filmed during the recording of the album in Nashville, TN. It features footage from the studio and interviews with each member (speaking of interviews).

Furthermore in late September the band will be releasing an extremely limited (1,000 copies being made) double album vinyl edition being released exclusively through Hostile City Distribution.

And reverting back to Jam Track Central for a moment, they also have backing tracks (drum and bass only mixes) available for preorder for all nine of the tracks off Culture Clash, all of which include tabs and transcriptions of all guitar parts. Guitarists, start your engines.

For more info on The Aristocrats you can check their official web site, their Facebook page, or their Twitter page.

And because the power trio can never get enough touring the very day after Culture Clash is released they are set to embark on a solid two month USA tour.