What’s Up With Black Sabbath And Bill Ward? 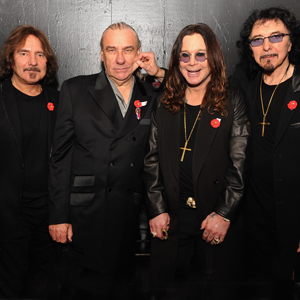 We’ve been a bit quiet on this topic as it’s run rampant and it looks like the opinions of the circumstances are growing varied and inconsistent with what’s been released. Since the announcement of an original lineup reunion of Black Sabbath back in November of 2011 there have been disagreements which have led to wild accusations. My role in this is to take what’s out there, slap it all side by side, and see what comes out of it that makes sense.

Ok. It’s a few days before November 11th, 2011. At this point I was told “hey, check out Black Sabbath’s web site on the 11th. They’re going to announce a reunion.” So the 11th rolls around and sure enough. They announce their reunion. I then wondered how so many people knew about the reunion prior to the official announcement. Good news all the same.

A few days ago drummer Bill Ward decided to divulge a public statement regarding his fate within the reunion. Within his statement he had expressed his disappointment in the turn of events at the behest of an, as he viewed it, unfair contract. Enforcing this observation is the various comments regarding the contract as unsignable. Comments like “Several days ago, after nearly a year of trying to negotiate, another “unsignable” contract was handed to me.”

The contract itself hasn’t been made public so that much is at the judgment of Bill Ward.

On top of that Ward has expressed he’s more than ready to make the jump with the rest of the band and move forward with Black Sabbath if more compromises are made for the contract what with comments like “I lay my truth down before you. I’m good to go IF I get a “signable” contract. I don’t want to let anyone down, especially Black Sabbath and all the Sabbath fans,” all the while insisting that it wasn’t a concern of money, but personal pride.

All of Ward’s comments were reinforced by a public statement released by his son. In a nutshell he had said the same thing, only with a bit less finesse.

The remaining members of the band expressed their sadness to the circumstances and offered the choice to join was still available, however they were more likely to move on than renegotiate the contract.

So far it doesn’t much look like drama, but rather just people telling others the circumstances. The drama only really seems to enter when Sharon Osbourne’s name enters the fray. Based off the three public statements released from Bill Ward, Aron Ward, and one statement from Ozzy, Geezer Butler, and Tony Iommi her name never actually surfaces? So why in Sam Hell is every saying Sharon fired Bill Ward?

Well it all seems like it surfaced from a website that I’ve chosen to not name (I don’t bring direct attention to things I’m reluctant to put stock in) had merely commented that “a reliable source” had clued them in that it was all under the discretion of Sharon that Ward is out.

Completely regardless of the fact that in Bill’s elongated statement he assumed full responsibility for his actions there has been a lot of buzz all over the place calling for Sharon’s blood and ultimately resulting in Sharon herself releasing a statement claiming to have no say in Black Sabbath at all. The fact that there was no specific quote for people to interpret personally the resource is chalked up to an ambiguous “reliable source.” Unfortunately reliability is all a matter of perspective and in this case I don’t see it as reliable. I’m not really a fan of Sharon Osbourne, but I don’t see how any of this could even be tied to her outside of speculation unencumbered by fact.

There are two lessons I think that we can all learn out of this. Firstly whenever someone’s bibliography includes “a reliable source” you can probably throw it out safely. All that means is the content provider is exploiting a loop hole that takes the spot light off them should any false allegation accusations surface.

Fictitious quote:
“Wasn’t us. It was our reliable source. Guess they’re not reliable after all. Hey, Johnny. A reliable source says Sharon Osbourne just fired you off our editing staff.”

Secondly making statements that your band is reuniting before the contracts have been signed is a bad idea. Seems like if anything you can prevent a lot of unnecessary drama by just playing it safe even if it means passing up a hip and memorable date like 11/11/11 to announce a reunion.