The Digitech iStomp: Download New Pedals To Your Pedal 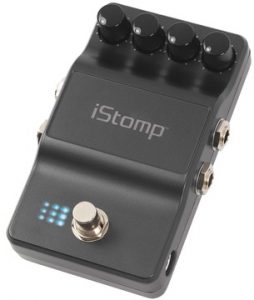 This is a pretty cool concept. You’ve got your pedal – you can download new effects – basically virtual pedal bundles to it from your iPhone, iPad, or iTouch.

Pedals that are modifiable via a USB connection to a computer are nothing new – but the portability involved with the iStomp makes it a contender in a different way. It’s upgradable on the go, no matter where you are.

Also slightly different than most pedals you can hook to a computer – most of them only allow you to download / tweak configurations on existing sounds, not download a whole new pedal.

The iPhone / IOS device is not needed except to load new sounds to the pedal – all of the signal processing is done inside the pedal itself – not your phone.

So, yeah, good job Digitech. Lets look a bit deeper into the iStomp.

What Can You Do With It?

Your initial purchase of the iStomp comes Digitech’s popular Redline Overdrive as well as their Total Recall Delay. After that you can download the “Stomp Shop” app and download any of the other virtual pedals Digitech is offering. Also, you can try out any pedal for 5 minutes – inline with your own amp and guitar.

You can also purchase a few iStomp units, and run more than one effect at a time, making your virtual pedals act more like the pieces of hardware that you’re used to. In this scenario you can also share any of the sounds you have downloaded with your Stomp Shop app amongst all your iStomp pedals.

There are 4 knobs that will look familiar to you in that they are round and can be twisted – but you’ll notice that there is nothing written above or below them, because they are soft knobs. Each pedal will have differing functions associated with each knob – and presumably some won’t be used in certain situations like with the Rockit Distortion, which only has 3 knobs.

What Virtual Pedals Are Available?

Some of these are licensed pedals from other manufacturers.

How much does this digital convenience and freedom cost? The MSRP is $229.95 but you can get it at retailers like zZounds (link below) for just under $150.00

So say you would need three of these things – you run distortion, compression and reverb at the least for a live situation. You would need 3 iStomp units – that’s $450 right there. Then $5 (or so) each for your virtual pedals. You’re at $465 right there. You could probably get these three pedals cheaper than that, so – how is this worth it?

Flexibility. You don’t even need to buy three iStomps – that’s just an illustration. If you purchased one iStomp – you could potentially have the power of 12 pedals for $200 – $150 for the iStomp and $50 for another 10 pedals plus the two that come with it. In this regard it’s a good price – it really depends on how you plan on using it.

I can see the iStomp becoming more of a utility pedal – something used to fill in the blanks in your existing pedal chain. Always wanted a tape loop effect? Well, now that’s only $5 instead of blowing a whole bunch of money on an entire pedal that only does that one thing.

The main benefit of the iStomp – bridging the gap between a pedal you can throw in your guitar case, and the new digital effects that you can purchase instantly for a fraction of the price of the same pedals.

You can grab an iStomp here, or check out more details and exact pricing.

All of this can be a bit new and confusing for those of us used to the old fashioned stomp boxes, so here’s a video that does a pretty good job of making it all clear.