The Dobrato Adds A Bigsby And Brings A New Voice To Resonator Guitars.

Resonator guitars are different animals. They don’t fit in everywhere; they certainly aren’t interchangeable with every other guitar out there; and as brash as they can be, you really don’t want them falling into the wrong hands. Of course, if you’ve heard a Dobro played by bluegrass masters such as Jerry Douglas, Rob Ickes or the late Mike Auldridge, you also realize how haunting and magical they can sound.

For those of you who’ve never gotten behind the wheel of a National, Dobro or other resonator instrument, the first surprise is their weight. Brass or steel models make your Les Paul feel like a plastic uke. Wood versions, generally favored for country and bluegrass, aren’t a whole lot lighter (though they have a much warmer tone).

The second surprise is that when you pick one up, you instantly begin playing like Keb Mo, Robert Johnson or Muddy Waters, whether or not you have a slide. It just happens and you can’t stop it. Metal-coned guitars bring out everyone’s inner blues man—yes, even old lily-white pickers like me who don’t play a lot of blues.

So normally, I wouldn’t be reviewing a resonator guitar. But I recently happened onto a very cool new model that weighs a little less, plays easily, looks sharp and brings a new voice to the party. The Dobrato, created by Kent Viles at Castle Creek Guitar Co. in Gunnison, CO, is a compact, easy-to-play resophonic guitar with a Bigsby B5 tailpiece installed. They currently come in either steel or brass (a wood model should be available by this November).

“I’ve just always been intrigued by getting different voicings out of acoustic instruments,” Viles says about expanding on the resophonic’s traditional tonal palette. “It’s a great sounding instrument on its own, but the Bigsby is a nice icing on the cake because it’s a whole other voice you can add, mainly to accentuate open string bends. I’m finding it’s really well suited to fingertstyle blues and I’ve got some guys doing pedal steel effects. It’s pretty versatile … and there is the aesthetic part of it.”

Assembled around a Highway 61 metal body with a rounded mahogany neck, Viles installs a Paul Beard resonator cone. He then slightly reshapes the neck, hand-carves a maple and ebony bridge saddle, and reinforces the lower bout with mahogany before mounting the Bigsby tailpiece and National biscuit-style bridge with Highlander coaxial pickup system. 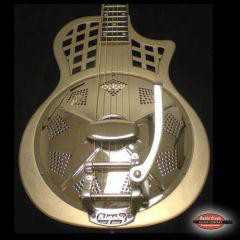 And because of the volume produced by the metal bodies, Viles uses extra light strings (.011-.52) to allow a little lighter action and more string travel from the Bigsby.

As for stress on the bridge and cone, Viles points out that pressing the Bigsby actually relieves tension on the strings, and then allows them to gently return to pitch. While wear was originally a concern, he’s now confident in the functionality of the parts and design.

The assembly process takes Viles about a day and a half. However, he allows three to four days to be sure the neck and bridge setup are perfect before an instrument leaves his hands. So far, 75 Dobratos have been sold, all essentially from word-of-mouth advertising.

Here’s a sneak peek at the prototype wood model, coming in late fall.

The price for the Dobrato and gig bag is $1,789. At this time, the guitars are available from either Castle Creek, Corner Music in Nashville, TN, or South Austin Music  in Austin, TX.