Ask Smitch: As per a request I’m banging out an article on the old Fender Malibu acoustics from the days of yore since passed. 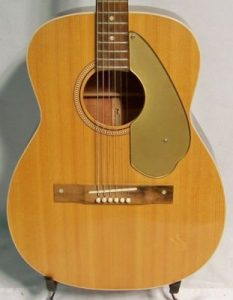 The Malibu was originally manufactured from 1965 to 1971 and has since been re-released and is available as more of a budget acoustic.  The model itself came about when Fender applied the concepts that made their electrics famous to their acoustic guitars what with a bolt-on neck and a general setup to match their electrics.

What gave them the idea to try this out? Well.  This part is entirely speculation completely unencumbered by facts, but I postulate that it was CBS.  In 1965 CBS bought Fender out and had started tinkering with various concepts.  Two piece maple necks, rosewood fretboards, simple things like that.  I’m guessing it was also them that said throw a bolt-on neck electric neck on an acoustic and see what happens.  Anyone is welcome to argue against me on that, though.

The response?  Mixed. Some people enjoyed them, but others would bust out the holy water at a passing glance.  As far as I can tell those that preferred it were primarily electric guitarists, but the primarily acoustic demographic didn’t get into it much.  That withstanding the Malibu did get reasonable attention from various guitarists most notably probably being Eric Clapton and Johnny Cash.  Even with guys like them playing Malibus… Malibues?  Malibi?  Whatever.  The guitar just sorta phased out as new guitars came along and was largely forgotten, but then Fender wasn’t put on the map for their acoustics anyway. 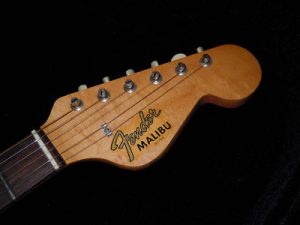 Because of its lacking impact it hasn’t become any more favorable in the eyes of vintage collectors. I found a few on Ebay which are going for about $300 give or take.  I’ve read that for one in mint condition you’re lucky to get about $600 out of them which isn’t much of a price difference from when they were brand new.  If you want a cheapie vintage instrument, though, and you don’t give squat about what others think, then you might very well have found what you’re looking for.

After seeing a Youtube video or two I honestly don’t think they’re that bad sounding. I mean, come on.  Wal-Mart guitars sound bad.  Something like the Malibu just sounds different.  Different is good.  When I was a kid my parents always told me I was different and I happen to be awesome so by extension the Fender Malibu is awesome because it’s different.

This article was requested using the Ask Smitch page on our site. Fell free to click here and Ask Smitch to cover anything guitar related for you!

Malibu doesn’t metal “tone bar” running through the body. That feature was in the Fender King & Kingman and some 12 strings. All of them had gold pick guards. Johnny Cash’s was a gift from Luther Perkins. The Fender Acoustics were designed long before CBS bought the company. In 1962 Fender hired Roger Rossmeisel from Rickenbacker to designed Fender acoustics using a bolt on neck. CBS scrapped them as they were not selling because the folk craze tanked about 1970. Keep in mind in their day these expensive pro instruments. The listed for $190 and $450 so they were not cheap.

I love my ’66 Fender Malibu. It’s the hangin’ around the house guitar; an easy player with a nice sound. It isn’t a Gibson or Martin, but it was only $350.00 plus the cost of some initial set up repairs. It is suspended by a vintage Tupper and Reed Music cloth strap (you know?) and after growing some mutton chops and learning a few Country Joe tunes it’ll be a great retro act!

In the Malibu the aluminum rod is a short cylinder that provides strength between the neck and the block. In the bigger models it is a long rod between the neck block and the end block, put there to keep them from imploding! I think the Malibu is the best of all the Roger Rossmeisel designed Fender acoustics. The earliest models have the gold sprayed plexi pickguards that look like vintage Rickenbacker pickguards.

As mentioned, Malibus were actually played by Johnny Cash, Joan Baez and Ray Davies, maybe as endorsements, but they sure seem to show up in quite a few gigging pix. As a previous poster commented, everyone who plays on it ends up liking it.

I think the collecting value will rise on these guitars, and I’d rather look at and play on a cool, fun vintage guitar with historical value than one that is designed to appear to have that cache.