The Guitar Meets The Golden Ratio

The study of the golden ratio in music is not a new idea. It’s not even old. It’s archaic. Johann Sebastian Bach was notorious for using numbers to bend his music to his will and the golden ratio has been found nestled right in with the rest of his numerology system and nowadays we’re over about two decades in on the ever growing movement of math metal bands.

And you know what? The people that do that sort of thing are on to something. Over the years I’ve found one of the most consistently fun and experimental ideas is to tinker with numbers in music, my favorite number being the golden ratio itself .618.

What Exactly Is The Golden Ratio?

If you’ve done your mathematical research already then you already know what the golden ratio is, but if you’re out of the loop then it will help to know beforehand what the golden ratio is lest you be completely lost through the duration of this article. It’s a deceptively simple concept to understand to a degree that you may expect more than there really is to the definition. To put it another way it may have required a genius to have noticed the ratio, but it doesn’t take a genius to understand it.

I can simply narrow it down by saying the golden ratio is just a proportion. The size of one thing compared to another.

What makes the golden ratio so unique is that say you take a 10 inch line and you divide it into two pieces. You wouldn’t just divide it in half, no. Instead you would measure up the line 0.618 percent of the length. Since I’ve chosen the easy to work with 10 inches as my original number the line would be divided into two pieces one measuring 6.18 inches and the other 3.82. A fast way to get the golden ratio of something is to multiply a number by 0.618.

So How Does This Apply To The Guitar?

Now that we have the obligatory boring stuff out of the way let’s discuss the application process. The sky is the limit when looking for ways to apply the math. Probably the easiest approach is the structure of the song.

What makes this method so accessible is that it breaks the math down to a simple line calculation like the example in the section above. You just count the number of bars you have, multiply by .618, and boom. Done.

Mozart’s piano sonatas are often popular examples in cases like this because of how he divided the sections of the sonatas up. The first part, the exposition, would present a theme, and the second part would develop the theme and work off it. His sonata in C major is also an easy example to come across since it’s 100 bars as a whole and is divided into 38 bars for the exposition and 62 for the development. It’s also a good example of how rounding gets used in this context. If you do the math they don’t equal the golden ratio 100%, but it’s damn close and the effect on the listener is still there. Sometimes rounding is just plain inevitable.

Another common technique is to apply the Fibonacci sequence which is closely related to the golden ratio. Fibonacci is much easier to describe since the common use is to follow the numbers of the sequence (1, 1, 2, 3, 5, 8, 13, 21, etc) and you designate key events be it specific chords, techniques or changes in the direction of the song at the matching bars.

So for example click on the picture and look at what’s going on. 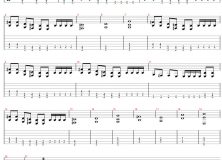 If you’ll excuse the rudimentary nature of my example (I wasn’t aiming to write my magnum opus here) the example obviously starts on the first bar and on each bar matching a number of the Fibonacci sequence the direction blatantly changes.

Now if you want to really micromanage your ideas you can consider how long the song is going to be in total and narrow it down to the seconds that line up with the sequence, or maybe even the tempo. Set your tempo to either 112 or 161 or 618 if you’re after something more punishing. Why stop there? A lot of guitars have up to 24 frets. You can play any of the strings on the 1st fret before moving up to the 2nd, then the 3rd, then 5th, and wash, rinse, repeat. Same with the golden ratio. Any string on the 6th fret, then the 1st, then 8th, and since these two examples are endless you can literally make it go on as long as you wish.

And what’s really mind boggling about all of this is, the undeveloped nature of my examples aside, it’s amazing how easy it is to get the flow of a song to sound very natural and welcoming when these principles are followed. This stuff isn’t just for dorks like myself who clearly have way too much time to think. Applying a handicap like this can get that grey matter really working.

Extra Bits on The Guitar and The Golden Ratio 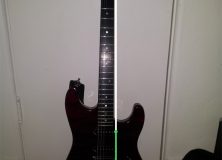 For kicks and giggles I thought it would be interesting to see how the ratio was laid out on one of my guitars. The specimen I chose to work with is my go to guitar, ol’ Operation Red Thunder herself. If you’ll excuse the crudity of the picture as I’m a guitarist before I’m a photographer, you can see I measured from the nut to the end of the body which measured to about 31.2 inches. Multiply that by .618 and that gives us just about 19.3 which drags us down to where the center of the neck single-coil pickup is. Kinda makes you wonder if Fender did that deliberately or, if like so many other things in nature it just sorta fell into place like that.