So you think you can roll with Mr. Rogers, huh?

Do you have the discipline? The guts to stand up for your principles? The consistency? 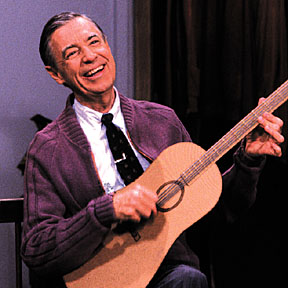 Anti-commercial to the bone.

Rogers decided very early in his career that mainstream, commercial television couldn’t do justice to his hardcore educational goals. So Mr. Rogers put in his two-week notice and went indie–to public television, where he knew he would never, ever be asked to sell out. There he enjoyed total artistic freedom for the rest of his life and career, staying true to his fans decade after decade.

Mr. Rogers woke up at the crack of dawn every morning. While you were still sleeping, Mr. Rogers was swimming. Then answering all of his fan mail, which is probably about 40lbs. more daily than you’ll ever receive. Imagine if you practiced guitar every morning as faithfully as Fred Rogers swam. Imagine if you gave that much care and attention to your fans. Rogers produced thousands of shows. Thousands. Do you have the determination and the guts to write thousands of songs? Play thousands of gigs?

Wrote his own songs. Mr. Rogers wrote his own material, including the song “Won’t You Be My Neighbor?” that every show famously started with. He could play jazz, and knew how to read and write music notation. And just in case you doubted for a moment that Fred Rogers was hip, you should know that he invited electronic music pioneer Bruce Haack to the show in 1968 to demonstrate how synthesizers work. Yes, in 1968, Mr. Rogers was teaching kids about synths. What were YOU doing in 1968?

Mr. Rogers received the Presidential Medal of Freedom in 2002 for his work for public television. In 2003, the U.S. Senate officially honored the man, stating: “[Fred Rogers] did not shy away from dealing with difficult issues of death and divorce but rather encouraged children to express their emotions in a healthy, constructive manner, often providing a simple answer to life’s hardships.”
*One of his sweaters is preserved and displayed by the Rock and Roll Hall of Fame. Okay, okay, that’s not true. The sweater is actually in the Smithsonian, not the Rock and Roll Hall of Fame. But it’s displayed just as reverently as a seared Jimi Hendrix guitar.

Mr. Rogers had a vision of what he wanted to do, and he wasn’t willing to compromise it for any amount of money. Don’t think this can be applied to rock and roll? Then you weren’t paying attention when Tom Waits was inducted into the Rock and Roll Hall of Fame earlier this year. If you ever get full of yourself, and you think you rock the most… remember that Mr. Rogers–mild-mannered Mr. Rogers–can still totally school you with his life’s work.

That’s why we in Phi Mu Alpha are all proud to call him brother.

I love Mr. Rogers he was the man!. I didnt know he was an acoustic guitar shredder though.

In tribute to Mr. Rogers I give you this – http://www.youtube.com/watch?v=yRgYFC2poOY

I wish I could find a video of him showing the synth.

I know! All I can find are tantalizing descriptions of the show and a video that got taken offline by YoutTube.