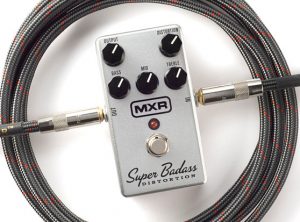 MXR has made many a guitarist happy with their tone-specific pedals in the “Badass” line, such as the Modified OD, and the ’78 Distortion, but those pedals were custom tailored for guitarists looking for those specific tones.

The Super Badass Distortion is pretty different, however – it does many things, very well.

What makes it such a Badass anyway?

The main selling point that makes this particular pedal worthy of Badassery is its flexibility and versatility. Between the custom tuned tone circuits and the gain circuitry, you can get almost any distorted sound and span years worth of tones – from the 70’s lower gain rock stuff, all the way up to the super saturated sounds from more recent times.

The pedal gives you a really articulate level of control over your sound without being overly complicated.

The simple controls really give you a surprising amount of flexibility. They consist of an Output, Distortion, Bass, Mid, and Treble. Between these 5 knobs you can create distorted to semi-distorted sounds that will delight you, whether you’re into country, blues, rock, or metal.

When you’ve got the gain low, the frequency response of the pedal is changed so that your guitar’s tone is able to shine through, fattening up the sound and clarifying it to give you that full bodied semi distorted sound. If you’ve ever noticed that “weak spot” in your distortion pedal when you’ve got the distortion knob cranked way down, you’ll certainly here the difference with the Super Badass.

Dunlop also spent a good amount of time working with the actual EQ circuit. Many distortion pedals have one tone knob – but you’ll obviously get a lot more flexibility out of the 3 independent Bass, Mid, and Treble knobs. The EQ circuit is very sensitive and responsive as well, giving you a broad range of options across the spectrum.

Frank Aresti from Dunlop describes the EQ the best: “The Bass knob goes from tight and focused to huge and pounding, and the Treble goes from smoky to searing while always sounding musical. The Mid control perfectly complements both.”

With that flexibility, it’s easy to dial in something that sounds great, yet expresses your own unique personality.

A nice touch, allowing you to play with the dynamics of your amp a little bit. Most distortion pedals don’t include this.

The folks at Dunlop set out to make a pedal that was extremely versatile, but rather than make it just so-so at a lot of things, they’ve succeeded in developing a pedal that is actually good at very many things – and I think that comes from the angle they approached it from in their design. Each element of the pedal has been given special attention – from the EQ circuit to the gain / distortion circuits. With that special attention to each control – there was also a lot of care put into how those controls work together.  It’s much more than a distortion pedal with a tone knob slapped on.

This all analog pedal is packed with features, yet easy to use – and allows you a virtually limitless number of tones and distortion possibilities. I guess we can say that’s what makes a distortion pedal a “Super Badass”.