The Steve Jobs Guide To Guitar (And Everything Else) 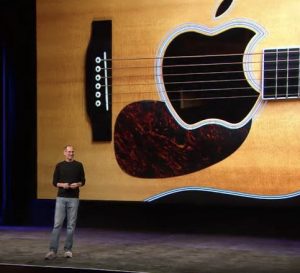 Woz and I very much liked Bob Dylan’s poetry, and we spent a lot of time thinking about a lot of that stuff. This was California. You could get LSD fresh made from Stanford. You could sleep on the beach at night with your girlfriend. California has a sense of experimentation and a sense of openness—openness to new possibilities.” -Playboy Interview, 1985

Let me preface this by saying: I’m not an Apple fanboy, at least not yet. I haven’t bought a single Apple product. I realize that’s a bit strange; it seems someone will give you an iPhone in your sleep nowadays if you’re not careful.

Nonetheless I’ve watched several speeches and read numerous interviews with Steve Jobs, and I’m inspired by the guy’s rare double gift: creative brilliance plus the strength to actually follow through on his own great ideas.

Year after year, even after failures, Steve got on his feet and made cool stuff. The lifestyle of a serious creative entrepreneur is not so different from that of any other artist–similar challenges, similar obstacles. This guy gave concert-length speeches on his products, whipping crowds into the kind of froth that’d be the envy of any rock band.

Here I’ve pulled together some quotes from Steve Jobs that spoke to me as a guitarist. Humor me and imagine for a second that “the Mac” is the name of The Steve Jobs Band’s first album:

“We think the Mac will sell zillions, but we didn’t build the Mac for anybody else. We built it for ourselves. We were the group of people who were going to judge whether it was great or not. We weren’t going to go out and do market research. We just wanted to build the best thing we could build.” -Playboy Interview, Feb. 1, 1985

Sounds like true indie spirit, doesn’t it? Today more and more bands walk away from major labels and make the music that most challenges and excites them.

“When you’re a carpenter making a beautiful chest of drawers, you’re not going to use a piece of plywood on the back, even though it faces the wall and nobody will ever see it. You’ll know it’s there, so you’re going to use a beautiful piece of wood on the back. For you to sleep well at night, the aesthetic, the quality, has to be carried all the way through.” –Playboy Interview, 1985

Sounds almost like a master luthier talking, doesn’t it? In a similar vein: I’ve seen local bands play shows, get tons of warm, genuine applause, and then go home miserable.

They knew something was missing. They knew their music wasn’t quite where they wanted it yet, and all that applause felt wrong.

If your music doesn’t satisfy you, if it doesn’t turn you on, if you don’t believe in every chord and every line of lyric, you’re always going to feel a void. Maybe nobody else knows about that plywood on the back, but you do, and it’ll eat at you.

Everyone has a different idea about what makes a well-built song. Whatever your yardstick is, try hard to measure up.

“It takes a passionate commitment to really thoroughly understand something, chew it up, not just quickly swallow it. Most people don’t take the time to do that.” -Wired Interview, 1996

It’s one thing to learn chord forms and scales. It’s quite another thing to dig into the theory behind them and understand exactly what they are, how they’re used.

“We’re gambling on our vision, and we would rather do that than make “me too” products. Let some other companies do that. For us, it’s always the next dream.”

Replace the word “companies” with “bands” in that quote above, and you’ve reached something true about music too: it doesn’t pay to be an imitator.

“Creativity is just connecting things. When you ask creative people how they did something, they feel a little guilty because they didn’t really do it, they just saw something. It seemed obvious to them after a while. That’s because they were able to connect experiences they’ve had and synthesize new things. And the reason they were able to do that was that they’ve had more experiences or they have thought more about their experiences than other people.” -Wired Interview, 1996

“A lot of times, people don’t know what they want until you show it to them.”

Charlie Christian was inspired by jazz horn players like Lester Young, and mimicked what he heard them doing on the then-new electric guitar. Decades later, Dick Dale adapted a traditional middle eastern tune to his surf rock style. Both players were hugely successful and influential on later guitarists (and on other highly creative musicians; Miles Davis was inspired by Christian).

Cool new music doesn’t just drop out of the sky. New styles form when somebody connects two things that weren’t previously connected. Learn from everything and everyone you can.

This is a saying that’s drifted around Apple since the beginning. For guitarists, it means: if you don’t deliver your art to an audience of some kind, you don’t exist.

Get out of your living room and go to an open mic. Record yourself playing and send the MP3 to a friend or post it on Facebook.

“Your time is limited, so don’t waste it living someone else’s life. Don’t be trapped by dogma — which is living with the results of other people’s thinking. Don’t let the noise of others’ opinions drown out your own inner voice. And most important, have the courage to follow your heart and intuition. They somehow already know what you truly want to become. Everything else is secondary.” -Stanford Commencement Address, 2005

We love music and so do most people in the UK and USA and Canada. We have a good time. It’s brilliant to play guitar …
Guitar Player and Guitar World should merge and be GTR Studio Digital Magazine that gives subscribers shares in the company. That way we can afford to rock out and still tell parents we got a good investment in Music. 100 million Guitar Players can’t be wrong! We want some of those puppies.

Awesome list, and great advice. As a PnW player, I think our breed of musician often misses this kind of advice. So much compromise, so much imitation (of the poorest sort, usually), and the end result is an insincere effort towards an explosive vision.

Thanks for posting…I needed to read this.

PnW must be Praise and Worship, I’m guessing?

Yeah, I can definitely see why in that context you’d feel like something is missing. If it doesn’t come roaring out, there’s definitely something amiss.

I’m not very helpful in that arena, but might I suggest you connect with a fella named Matt Blick? Matt’s a Christian musician from the UK; he’s been a worship leader, and you guys might be able to exchange some ideas. You can find Matt at http://beatlessongwriting.blogspot.com/