A Moment With Suhr Brand Guitars

Founded in 1997 by John Suhr and Steve Smith, JS Technologies Inc, the parent company of Suhr Guitars. It would become a name known for designing and building guitars, amplifiers pickups, and effect pedals of the most exceptional of calibers. As they round off their fifteen years of business they have unveiled the Korina Flame guitar which in the very least looks as astonishing as any other guitar if not more so. 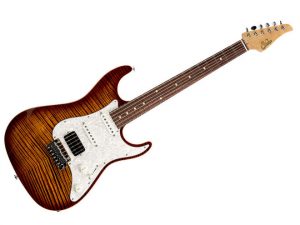 The Korina Flame is a highly limited edition model guitar Suhr has been preemptively promoting just recently. And by highly limited I mean just that. There are slated to be only seventy of these released and they’ll come at a premium price. Alongside unveiling the guitar Suhr has also opened up the option to preorder the guitar, so you may want to swing by Suhr.com if you have a few grand laying around collecting dust.

Probably the most readily apparent detail about this guitar is the wood it uses. The wood of choice for the neck and body is korina, the neck being complemented by an Indian rosewood fretboard, and the body with a flamed maple top with a pearl pickguard.

The body is chambered and slightly smaller compared to other guitars of a similar design. Between the chamber and the wood choices it offers a vibrant and warm tone with a lot of catering towards developing satisfying highs.

The Hardware and Stuff

When it comes to the hardware the Korina Flame uses a Gotoh 510 bridge and a set of Hipshot locking tuners, both paired up to offer the versatility of tremolo while reducing the probability of heinous tuning problems to a minimum.

The Pickups and Things of the Sorts

And what would a Suhr guitar be without a set of the pickups that helped make them famous over the years? The guitar follows an SSH setup with two V60LP single-coils and a DSH humbucker loaded in. The V60LPs are designed to bring out the midrange more while the DSH offers a much warmer, lower sound with greater harmonic reaction. All pickups use Alnico V magnets.

The Finishes of Utmost Finality

If there’s anything about Suhr guitars it’s that they know how to make one sexy looking guitar. That trademark of theirs lives on here as the Korina Flame is made even more fashionable than thought possible by two available finishes such as the Bengal Burst and the Chili Pepper Red finish both translucent as to not hinder the flamed maple top from living up to its aesthetic potential.

As I’d said before the Korina Flame comes at a price. What I do know is what the price is in Great Britain pounds. What I don’t know is if the US price is simply just converted currency or if Suhr has a whole different price laid out. With that it costs £2,899.00 and if the US price is one in the same it would amount to approximately $4,550.