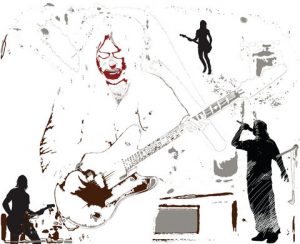 Legend has it that Randy Rhoads got his Blizzard of Ozz gig without playing a single note. Ozzy Osbourne claims he saw Randy, heard him tune up through his little Pignose practice amp and offered him the job on the spot .

It would be nice if, like Mr. Osbourne, you could just “know” whether or not a potential band member was going to be a good fit without going through all the hassle of a proper audition but, unfortunately, that’s hardly ever the case. However, the good news is there are a few simple steps you can take to make sure the audition process is as pleasant as possible for both you and the prospective band member.

Before the audition
Obviously the purpose of an audition is to see and hear somebody play. But when you’re looking to add a new band member you really want to audition as few people as possible. That may sound counterintuitive but it is true. Unless you have a lot of time on your hands you don’t want to sit through 20 guys auditioning for your bass player slot.

Wouldn’t it be better to have an effective screening process that would whittle that number down to just two or three candidates that actually audition?

Awe! The wonders of modern technology. Gone are the days of posting a two line ad in the local music rag or tacking a handwritten not on the music store bulletin board. Now the simplest and most effective way is to hit the internet.

Posting on Craig’s List or an internet bulletin board will allow you to be much more specific in your ad and will also provide a channel of communication between you and the candidate before an audition is ever scheduled. You can filter out many less qualified candidates through email if you ask the right questions. Here are a few examples of good pre-screening questions:
What’s your commitment level? (are you expecting to play and/or practice three times a week? Once a week? Once a month?)
Previous band/performance experience?
What type of equipment do you have?
What are your earnings expectations? (Are you expecting this gig to be your primary income? Or are you not expecting to make anything?)
What are your musical interests/preferences?

You may think this process is beginning to look an awful lot like the corporate hiring process. And you’re exactly right! That is precisely what you want the audition process to look like! Companies will screen out the vast majority of applicants, saving only those that rise to the top of the process for the actual interview – or in our case – the audition.

Through the process of elimination, by asking effective screening questions, you will hopefully get down to a manageable number of well qualified candidates. That’s much better than living through your own version of American Idol audition week! Effectively screening “applicants” helps you avoid those awkward situations where you have an obvious “bad fit” in the middle of your rehearsal space, plugged in and waiting for his big chance. We’ve probably all been there. You don’t want to hurt the guy’s feelings so you wind up wasting his time and yours when it all could have been avoided with an effective screening process.

So, you’ve pre-screened your “applicants” and landed on just a handful that you’ll actually audition. What’s next?

Some bands prefer to bring a candidate in and give them the old “baptism by fire” treatment. They throw songs at them and just generally jam with them to see how they do. There’s value in that approach. Personally, I prefer to have the candidates learn three or four songs in advance and come to the audition prepared to play through them with the band. Then I like to have a short jam.

Obviously, the musicianship part of the equation is important – but is it the most important thing when hiring a new band member? I would say their ability to play is 50-60%. Another major factor is their personality. I’ve had the opportunity (or maybe misfortune?) of playing with some excellent musicians who had lousy personalities. That can make for a miserable experience.

The flipside can also be a drag: a guy or gal with a great personality that struggles musically. True, they can always get better – and sometimes you have the time for that to happen – but it can be very frustrating dealing with another band member’s learning curve. My rule of thumb is this: as long as they can “hold their own” musically, I would choose personality over virtuosity almost all of the time.

Now that you’ve heard the candidate play (hopefully with the whole band), it’s time for what I think is the most important element of selecting a new band member: the post audition interview. This is an opportunity to dig a little deeper than in the pre-audition emails.

Ask them about their expectations, concerns, outside commitments – anything at all that would impact their ability to contribute to the band. Also give them an opportunity to ask the band questions as well. After all, they should be auditioning you just as much as you are auditioning them.

This may run counter to all the great rock and roll Cinderella stories, but even if the audition goes really well I WOULD NOT offer them the gig on the spot. A better suggestion is, after auditioning each of your finalists, get together as a band and discuss the pros and cons of each candidate. Consider their playing ability, of course, but also their personality. What will they bring to the chemistry of the band? Are there any red flags or concerns?

This is potentially a long-term relationship with a new band mate you’re considering – make the best choice possible.

Unlike the corporate world where “probationary” periods are common place, in a band setting it’s crucial that once you do make your selection that you make the new guy feel like he’s part of the band.

Recall when Metallica hired Robert Trujillo? They gave him a million dollars once he joined! I’m not suggesting you have to shell out cash to your new bass player but think of the message that sent to Trujillo. He probably felt like “these guys are committed to me – I’m committed to them”. Imagine if they would’ve told him, “Well, we’ll give you a try for 90 days and see if it works out.” What would that do to your commitment level to a band? Either they want you or they don’t.

Once you’ve made your decision stick with it, move on, and don’t look back.

By day Jeremy Lunnen is a mild mannered corporate trainer for a call center outsourcer, but on the weekends you’ll often find him handling lead guitar and vocal duties in his band Third String, a classic rock/oldies band he’s fronted in the Pacific Northwest since 1998. Jeremy cut his guitar teeth in the early 80s and spent almost ten years as a radio disk jockey. He’s the father of six – including three teenagers (!) and can draw perfect Judas Priest, Def Leppard and Van Halen logos freehand.

The youtube videos of Dream Theater auditioning Mike Portnoy’s replacement demonstrate how this process should go.

Love the content I think the info is hugely helpful!!