Some artists and bands make great music, play concerts, and just march on merrily in that direction for the whole of their careers.

Others – take it a step further, into television shows, merchandise, even movies.

It’s a smart step because as an artist or band you really don’t know how long your music will be able to float the boat.

Some artists come up with brand ideas on their own, and others have their management involved, or it might even happen long after their death.

Technically a band or artist is a brand in itself, but some have taken the idea much further.

Here is a list of the Top 11 who really branched out and became a brand name. The Smitchens and I split the list up and did a little rambling about each one.

The first two are actually brands that became Bands:

Here’s a twist – a brand (idea) that became a band. I’m sure the whole enterprise went a lot further than any creators of the movie could have expected.

Mostly what you’ll find out there on Spinal Tap is T-Shirts, but Spinal Tap is on this list because they are actually a brand that turned into a band.

I think they should have marketed some of Nigel’s inventions from the second movie, but they didn’t.

Ok.  So here we have a band that tours, records albums, and even has a signature guitar (at least Skwisgaar does.  No luck for you, Toki).  This is fine and dandy.

Other little gems that have followed in their wake have been endorsements out the wazoo from Krank, Gibson, Marshall, EMG, Dunlop, Line 6, and M-Audio to name a few, getting some songs in Guitar Hero and Brutal Legend, and even getting some figurines manufactured.

The remaining 9 are bands or artists that maximized their brand:

Les Paul’s place on this list is more so by default than it is from any hard marketing.

If you go and ask one-hundred people what they think of when they hear “Les Paul” most will say a guitar.

That’s not necessarily a bad thing.

His name is on one of the guitars that has shaped history and while his name will never die the guitar its on has most definitely cast a shadow over his other contributions.

Though fortunately all hope isn’t lost because biographies about the man come up before Musician’s Friend ads in a Google search on his name, so maybe I’m just being some crazy pessimist.

Sometimes I wonder if Zakk Wyle is more famous for his music or for the amount of signature gear he has his name on.  Yeah plenty of guitarists have signature guitars, but this guy takes that to an excess having a few different signature Les Pauls, Flying Vs, and even a signature Dimebag Razorback.  Why doesn’t he just design a new guitar and call it the Zakk Wylde?  Oh wait.  He did.

Anyway.  That’s just the start of it.  He has a signature wah, amps heads, practice amps, speakers, and pickups.  As if that wasn’t a tad excessive he has two signature lines of electric strings and one line of acoustic strings.  Strings?  That’s how far it’s come?  And he can’t even be content with just one line he needs three?

The man sure likes seeing his name everywhere.

I’d say Korn did well to take advantage of their musical success which no doubt helped supply several opportunities, both musical and non-musical alike.

I’d say the snowball effect started when they were offered free clothing from Adidas, which was quickly switched to Puma when offered a whole half a million dollars to endorse them.

And thus the band-billboard begins.

Next thing you know the David Silveria’s modeling for Calvin Klein, Head’s starting a clothing line with an exclusive deal through Hot Topic, and Jon Davis is contributing some not so inconspicuous voice overs for the lead “actor’s” singing parts.

And don’t forget that episode of South Park they joined in on.  I’m probably missing a few other details, but we’ve got bigger fish yet to fry, so moving on.

Relatively new to the world of brand merchandising, Slash certainly is not being left behind. He’s helped with the Guitar Hero game, promoted it, and played it in public.

He even managed to piss off Axl Rose somehow in the process.

There is even a Slash Guitar Hero Action figure.

He’s also got an autobiography, its a great read, btw.

I don’t have access to any stats on how many Metallica T-Shirts there are out there, but there are probably enough to fill Lake Michigan.

I realized Metallica was becoming a brand when they released their “Live Shit – Binge and Purge” Box set.

My roommate in college got it, and it was just full of Metallica stuff.

It had 3 CDs, 3 VHS tapes, a booklet of photos, handwritten notes, documents, and other readables from the tour. And a stencil, so you could paint the “Scary Guy” anywhere you wanted.

Since, Metallica hasn’t stopped with the merchandising.

That’s the first thing that comes to mind when I think of the Dead’s merchandising tactics.

It’s not so much any more, but you used to see anywhere from one to 30 Grateful Dead’s stickers on cars as you’d be sitting at a traffic light.

T-Shirts were another biggie.

The reason I think the Grateful Dead belongs on this list is because in my younger years, I knew their logo on sight before I ever heard their music.

There’s even a onesie for your kiddie.

You can’t be the biggest band of all time and not have a plethora of merchandise (licensed and not) showing up everywhere.

There is/was just a mountain of Beatles merchandise out there. Dolls, lunchboxes, you name it, somebody made it.

The biggest branding play I think of initiated by the Beatles is the movies:

There is also a Beatles version of the  Monopoly game.

Ozzy Osbourne certainly did establish himself very well early on in music, but is it just me or does he seem to be doing more and more commercials and less of anything worth seeing him in?

I mean really.  We’re in an era where people are at least just as likely to talk about what cell phone Ozzy’s using as they are anything he’s doing in the music world, and lest we not forget those World of Warcraft commercials? And Beiber.

But I’m beating around the bush.

We all know the real meat and potatoes here is The Osbournes, the reality television show where we had the luxury of watching the Osbournes in their personal time.

I suppose enough people loved it to keep it going for four seasons as well as get them some camera time in the third Austin Powers movie.

And just in case you can’t get enough they’ve released the first two seasons on DVD so you can relive the nostalgic joy. 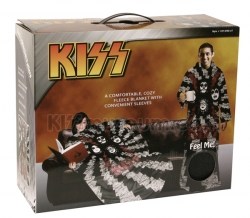 Where do I even start with this one?  Who else would be at the top of this list?

You could easily make a list of all the things Kiss’ name has been slapped on that would be longer than this entire article.  Toy cars, Christmas ornaments, toys, rubber band bracelets, bobble heads, condoms, toilet paper, pinball machines, cartoons, and even freaking snuggies.  Snuggies!  Really?

Back in 1999 the movie Detroit Rock City was released as well as the PC first-person shooter Kiss: Pyscho Circus – The Nightmare Child.  Good thing they gave the game three titles.  And then there was that time Gene Simmons took a tip from Ozzy and started a reality television show starring his family.  I’ll bet if it were the other way around there’d be a lawsuit.

And everyone knows this whole thing isn’t new for Kiss.  They’ve been marketing themselves since they started.  A friend of mine has a few Kiss vinyls, one of which has a paper for info to join the Kiss fanclub.  Just make a check out to Gene Simmons, all rights reserved to Gene Simmons, and this goofy fanclub is still going strong.  Only 50-75 bones to join.  They also have an album here and there and occasionally play live music, but who cares about that?  I’ve got a snuggy.