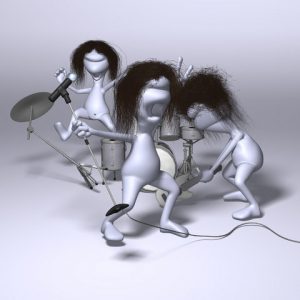 I like to think I know a thing or two about cover music. I’ve been playing in cover bands for a few years now and I live in the cover band capital of the world, New Jersey, where cover bands out number original bands by the hundreds.

Today it seems that the cover bands, at least in my area, all play the same stuff. There are a ton of great Top 40 hits to choose from, yet bands stick to a short list of tired, worn out tunes. I’m tired of playing them, and I’m definitely tired of hearing them.

So if you’re in a cover band, or maybe in an original band that needs to fill up their set with a few well known songs, consider this list of my Top 11 Overplayed Cover Songs.

11. “Rock ‘n Roll All Nite” – Kiss It’s ambitious of you to want to rock all night, but I’d prefer that you didn’t. In my opinion, unless you’re going to go all out and do the make up, wear the leather and maybe try breathing fire, don’t bother playing Kiss. The stage show is what made the band popular, not the music

10. “Vertigo” – U2 “Uno, dos, tres, catorce!” For those of you who didn’t pass 7th grade Spanish, that means “one, two, three, fourteen.” I guess Bono had vertigo when he recorded this song. I think die-hard U2 fans would agree this is definitely not one their best. I’m not even sure a U2 tribute band should bother with this song.

9. “Mustang Sally” – Wilson Pickett If the band at the bar is playing this song, they’re probably all eligible for an AARP membership. The women dancing to it probably are too. This song was over played like 30 years ago. It’s time to give this tired old song a rest.

8. “Blister in the Sun” – Violent Femmes This is a tune I think bands play just because it’s easy, never mind that it’s probably one of the most annoying songs ever recorded.

7. “I Want You to Want Me” – Cheap Trick You’d think that once the queen of poor decision making herself, Lindsay Lohan, decided to cover this song, it would have ruined its appeal once and for all. Unfortunately, bands are still trying to force this corny tune down our throats.

6. “Wonderwall” – Oasis Every college kid with an acoustic guitar in their dorm room knows this song. I’ve been hearing it everywhere for over a decade: on the radio, at parties, coffee houses, restaurants, bars, clubs – enough is enough. It’s not that good of a song! The chorus is boring the first time you hear it, let alone the million times it gets repeated at the end.

5. “Crazy Bitch” – Buck Cherry It’s pretty obvious why this song still gets played. It gives the band an excuse to bring all the “crazy bitches” on stage to dance. Well, I can’t blame you. I never complain when a 20 something girl gets on stage and shakes her moneymaker. But, just listen to the song! I can’t take it seriously. Not to mention that just playing it kind of makes me feel like I need to take a shower.

5. “Brown Eyed Girl” – Van Morrison Van Morrison himself was once quoted as saying, “It’s not one of my best, I mean I’ve got about 300 songs that I think are better.” This song has been done to death! Maybe take it from the songwriter himself and choose another song from his catalog.

4. “Sweet Home Alabama” – Lynyrd Skynyrd A cover band staple for decades now, this song is played often and often played poorly. Far too many times I’ve heard bands reduce this classic Skynyrd song to a 5 minute jam on D, C and G. There’s way more to it than that! If your band is going to do it, at least do it right. No one needs to hear another half-assed rendition of this song ever again.

3. “Sweet Caroline” – Neil Diamond I’d put this song into the same category as “The Electric Slide” or “The Macarena”. It’s more of a group activity than it is music. I guess it continues to be played because, for some reason, drunk women love yelling, “Ba-Ba-Ba,” and, “So good,” at the top of their lungs, in unison. I personally wouldn’t mind never hearing this crappy Neil Diamond song ever again.

2. “Pour Some Sugar on Me” – Def Leppard Oh the 80s was just full of cheese, wasn’t it? I’m not sure why this song has stood the test of time and risen to the top of cover band set lists. And if you ask me, it’s a little unfair for your drummer to play this song with both arms, don’t you think? Rick Allen only had 1 arm to work with. If you insist on playing this song, tell your drummer to stop showing off and tie one arm behind his back.

1. “Living on a Prayer” – Bon Jovi This is by far the most over played song in New Jersey, for obvious reasons I guess. Every time I hear a band play this song I’m always curious to see if they will attempt the modulation in the last chorus. Probably not. After all, I don’t even think Bon Jovi can sing this song in it’s original key anymore. This cheesy 80’s hit went out of style along with the entire decade. Sorry, I know I’m from Jersey but I’m not down with the Jovi.

Margaritaville? ever heard of this song? seems a wee bit over coverred by most lazy grandpa cover bands

How about doing a list of great cover songs ! Few bands do or have forgotten about

Right you are, Ken.

I completely agree with you, but as long as drunk women scream when they hear these songs begin, they’ll keep getting played. Women have all the power over bands, for better or worse.