The Ballad Of Cigar Boy – A Unison Tapping Lesson

Tapping Into The Unconscious

Years ago, I was fortunate enough to work at a funky music store in Cambridge, Massachusetts that attracted weirdos and cool people from every rung of the social ladder.   One repeat store attendee (I differentiate him from the store’s customers in that he never bought a single thing from the store that I saw) was a guy who would come in for 20-40 minutes at a time, plug an electric into an amp and then play the worst rendition of Black Sabbath’s “Paranoid” imaginable at high volume levels.  This would also involve some flailing fingers and random notes for soloing.

The performances were remarkable not for their virtuosity (Though I’m sure he was convinced it sounded awesome, it alternated between being amusing and painful to the two of us working there)  – but was instead for their consistency.

Over a one year period of time, every week he played the same thing at the same low-level of performance (the volume level wasn’t tolerated after the first visit so technically there was one change).  I could have made a recording of the first time he came into the store and just played it on every subsequent visit and it would be almost the same experience.

None of this, however, explains the naming convention.  After sonically assaulting the staff, some bizarre theories of music and playing philosophy would be espoused.  One of these rants included a lengthy explanation about how hammer-ons were the best guitar “trick” because they made you seem like you were playing a lot of notes when you weren’t (!?!).

The capper was the day that he came in smoking a Cuban cigar and talking about how (Guns and Roses guitarist) Slash had his hat and that was Slash’s “thing” so maybe the cigars would be his “thing”.  As we were about six months into this weekly odyssey, I was pretty fed up when I said, “Well maybe you could learn to play the guitar and then playing the guitar well could be your thing.”

And so a mythical super-hero/super villian named Guitar-Boy worked its way into the hollowed horror’d halls of store lore….

I’m working on a solo and I’m trying to really accent one note but none of the bending or sliding techniques in my technical arsenal are working for me….and that’s when I think about the parrots.

When I lived in South Pasadena, there were moments where hundreds of parrots would flock and congregate.  Their squawks made the most incredible sound….the pitches were all in a similar range but have multiple attacks and they created this real gut wrenching intensity for me.  (Yes, at the moment the family is leaving the library hold their ears while running to the car – I’m that guy (i.e. that weirdo) that’s sitting there with his eyes completely closed and enraptured in the sound.  I think it also holds such resonance for me because Diamanda Galas’ early works still loom large as a defining influence on me and the sounds reminds me of some of the things that she’s done with extended vocal techniques, multiple microphones and delays).

Anyway I realized that sound – multiple attacks on a really limited pitch basis – was what I was looking for.  The easiest way to get that sound was to use a combination of taps, hammer-ons and pull offs. 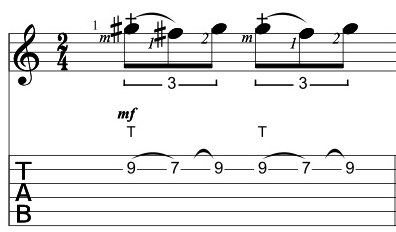 I use the second finger of my picking hand for the second note – but you could just as easily use the third.  The challenge at higher tempos is working the tapped finger and the finger doing the hammer on into the same fret.  I’ve included the triplets as an easier rhythm to use with a metronome but I actually view this more as a sextuplet idea: 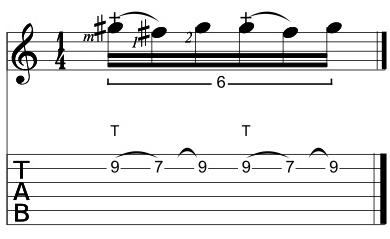 Start the lick slowly and consistently and work up the tempo.  Ultimately working the pattern out of a strict rhythm gives it a random (and a cooler sound).

.
As a technical note: I rest my fretting hand lightly on the fingerboard to mute the other strings.  You’ll get some noise when you move your hand off the fingerboard if you’re using a higher gain setting (You’ll hear it at the end of the mp3) but it goes with the territory.
In the mp3 below, I started by playing the lick slowly and then progressively play it faster.  For the purpose I’m using it in – I would only play the repeating pattern 3-4 times in a row to accent the F# – but compositionally I think it has an unusual almost synthesizer sequenced texture.  It might be an interesting approach as an ostinato idea over a contrasting bass/guitar line/etc.

Now the joke’s on me because I’m posting a lesson about using hammer-ons and pull offs to make it sound like you’re playing a lot faster than you really are.   From solos to parrots to Diamanda Galas to Cigar Boy.

Part of any creative artistic endeavor is creating connections between things that other people don’t see.  In addition to the musical skill required to pull it off, it also requires exposing yourself to (and being engaged in) as many different things as you possibly can to draw from to make those connections.  In other words, practicing is important but so is seeing a show, going to a museum, taking a trip or engaging in anything that expands your experiences with (and connections to).

The key is seeing how things are connected, how they could be connected and relating it back to what you do.