Today marks the first installment of our indie spotlight/review segment and the first name on my list is Taka Minamino. 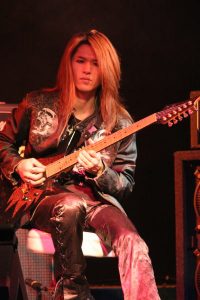 Taka Minamino, in summary, is a very technically proficient guitarist who has played with the likes of Derek Sherinian, Jeff Scott Soto, Jeff Bowders, and Tony Franklin. Born and raised in Japan, he’s been playing since he was 14 and has graduated from and since then taught at Musician’s Institute.

My first impression of Minamino’s sophomore album Blood Rain was the feeling that my hair was suddenly growing longer (even in the places where hair doesn’t seem to sprout as vibrantly as it used to) as this need to bang my head surged through out my neck. That’s a feeling I haven’t felt in a while.

Blood Rain is through and through an intense metal album and it never pretends it’s anything else. Taka himself covers all guitars, bass, and guitars, and personally wrote, arranged, and produced all the songs save for one where a certain Rafael Borks assisted in arranging the title track Blood Rain. Atma Anur covered the drums on all tracks save for one, and Kevin Jones who supplied vocals and lyrics.

The opening track Woke Up Dead is probably the best first impression an album like this would need. It tells the listener exactly what kind of a ride they’re in for and if you can’t handle the intense heat then you’d best be getting a plane ticket out of the kitchen. The songs with vocals are all primarily driven by their strong and unrelenting energy thanks in large part to how well the drums and rhythm guitars lock in together.

As for other instruments, the vocals are all projected harshely with aggressive screaming that blends well with the hard hitting style of the music. The bass itself isn’t quite as audible and generally follows what the rhythm guitar is doing while filling in the need for the low frequencies. The keyboards also set a bit more in the back and mostly help define the harmony progression at work, though sometimes they do come up a bit more in the front and show us what they’ve got, but it’s never anything too eccentric, so don’t expect Minamino to go Tony MacAlpine on you or anything.

The solos are probably where his influences shine the brightest as they’re rife with Malmsteen and baroque tricks. If I were to use one word to describe his solos it would be “great.” They are mind blowingly proficient. Minamino displays an all out mastery of any technique a guitarist can use to belt out a wicked solo. While they are all generally very shreddy they do demonstrate a lot of melodic control and while they’re heavy on the speed and technicality they still feel like they’re saying something along the way thanks largely to his really connecting with the harmony progressions and his variety of notation. I’ve listened to the album about 6 times now and each time I find something new in his solos. Like I said. Great.

The few instrumental songs Blood Rain and Mercy of Evil are probably better described as longer solos. While the vocal songs are primarily driven by the energy and the vocals the instrumentals give his solos free reign for a few minutes at a time. They follow the same formula his regular solos follow. They really connect with the harmonies, they have plenty of speedy licks, but what really makes them excel is that they build more on melodic ideas and they are very pleasing.

Blood Rain’s strongest point is its technique by far. Minamino has stamina, precision, and timing well on his side. He frequently and seamlessly flies through swept arpeggios, taps like it’s going out of style, and punctuates his solos with whammy bar tricks. The rhythm guitars are very well performed as well and very intricate. His performance is very straight forward and I can’t think of a better way to sum it up. Simple and to the point.

The guitars guitars all have a nice, full tone to them and I personally appreciate the sound of a guitar filled to the brim with mids. His use of reverb is also reminiscent of the way reverb was used in the 80s, but not quite as overbearing. The drums all sound pretty good if not a bit low. As I’d mentioned earlier the bass is set heavy on the lows, but it seldom pops out and greets you . The keyboards are a bit in the back and are present enough to help give you the appropriate feeling without battling against the guitars for attention.

Blood Rain also minimizes multi-tracking. It’s a rarity to hear two guitar tracks playing at the same time and save for a few times where vocals are layered none of the other instruments are ever multi-tracked. It’s nothing that couldn’t be accurately played in a live performance.

If anything Taka Minamino certainly is an incredible guitarist and Blood Rain looks great as a resume to demonstrate just how good he is. Blood Rain is a strong, full sounding album and while the faint of heart might find this a bit taxing I know there is a large demographic for metal heads that would do well to check him out. Give him a few years and he’ll be surfacing in forums arguing about who’s the fastest guitarist out there.