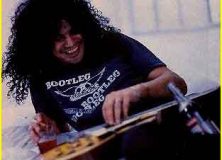 Slash is one of those guitarists who you can just say, “Play something.” and he doesn’t need a band, drums, or anything to back him up. He can fill your ears with great sound all by himself.

When I was first getting into guitar – Slash was a rising star – Guns N’ Roses hadn’t quite made it, and I caught glipses of him on MTV every now and then. His passionate style of playing was what caught my attention at first, as well as his red hot, searing solos.

A few years later, after GN’R got rolling, Slash started playing the Godfather theme at concerts. Here’s a clip from one of those – it’s a completely magical moment that most of the guitarists in the audience always looked forward to.

Roll back the clock about 5-6 years for the next one – from the famous “Live at the Ritz” show that aired on MTV and other networks, here is Paradise City. Check out Slash’s little intro – as well as the perfect sound he’s getting out of his Les Paul / Marshall combination. The year is 1988 and this is really when the Guns were at the top of their game from an energy perspective, and they were getting along a lot better back then too – and you can tell, they’re having a great time.

Here is one of the famous solos from the 90’s era Slash. It’s from the Riverport Ampitheatre, on the day of the famous “Riverport Riot” – where Axl slammed his microphone down and left the stage because a fan was taking pictures during the show and security wouldn’t take the camera away fast enough for him. Slash ends this solo with the Godfather theme as well.

Slash has been busy lately – after wrapping a tour, working on (and being a part of) Angry Birds, and already planning a new album release.