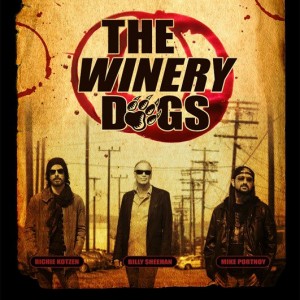 When I first heard of the formation of this particular supergroup a few months ago, I was pretty excited. If you sit and try to come up with the best supergroups, these three guys are probably on your list in one group or another.

The Album: The Winery Dogs

The self-titled album will be released by Loud And Proud Records on July 23rd, 2013. The band members have been kind enough to release 3 tunes off the album, and we can show you two of them right now. The third is currently exclusive to Guitar World.

It’s great to hear these three guys making music together. Their backgrounds are as varied as could be – but they’re all known for playing in bands that know how to write great songs. Not all supergroups focus on the song – but it seems that the Winery Dogs are doing just that.

Richie Kotzen is known for his work in Mr. Big as well as for performing guitar duties for Poison, Greg Howe, and his prolific solo career – with records spanning from 1989 to 2011, the most recent being 24 Hours. Kotzen is taking on the lead guitar work, as well as the vocals on the album.

Richie’s voice sounds amazing – oddly reminiscent of Chris Cornell, which lends a SoundGarden-esque vibe to the music, but the music itself bears no resemblance to SoundGarden.

Billy Sheehan is handling bass duties, and is another that is well known for being able to put the songs first, although,  he can burn up the fretboard in a way that not many bassists can. Billy has had an amazing career, with the likes of Tony MacAlpine, Steve Vai, Greg Howe, Mr. Big, and plenty more. Billy’s fans will be pleased to hear that his sound – that Billy Sheehan sound – is clearly evident and audible on the record.

Mike Portnoy is probably on everyone’s supergroup list as a drummer, right? His work with Dream Theater is legendary, and he’s also handled drum duties for Avenged Sevenfold. He co-produced many of the Dream Theater albums, and has released many instructional drum DVDs.

Tour dates are still coming, but for right now you’ll only find them outside the United States. Here are the European Dates, and you can find everything else on The Winery Dogs Official Website.