One of the coolest things unveiled at Summer NAMM is probably Vox’s Tone Garage Series effect pedals. The Tone Garage Series is a set of five different effects, each with inspiration manually extracted from various custom automobiles. Each pedal isn’t just fully analog. Each pedal comes equipped with a tube to accentuate your tone with a nice, lush tube sparkle.

Of the five new pedals they are named Double Deca Delay, Trike Fuzz, Flat 4 Boost, V8 Distortion, and Straight 6 Drive. Each pedal is built to last with all-discrete circuitry – circuitry built without any integrated circuits, just the fundamental parts like transistors, resistors, etc. – housed in a die-cast body that could take a bullet and live to tell the tale. Using Hi-Volt technology the tubes can push up to 200 V without breaking a sweat. And the Tone Garage pedals are true bypass for good measure. 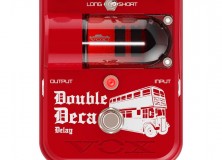 Presented in a ravishing red die-cast chassis the Double Deca delivers its full analog sound by the powers of a 3205 BBD chip. Its four knobs give you control over level, feedback, time, and modulation to give a bit of a chorus shimmer to your tone. Plus there’s a three-way toggle switch that switches between short delays and long delays with a third option to blend both at the same time. 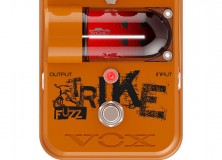 The Trike Fuzz is an octave fuzz pedal that can dish out up to three octaves at the same time in three different octave modes. This pedal uses a diode that gives this pedal a sound not unlike germanium diodes. The four knobs control volume levels for the dry signal, a -2 octave, a +1 tone, and a gain knob. The toggle switch can swap between octave up, octave down, and both at the same time. 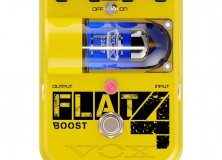 The Flat 4 Boost, in addition to the features mentioned above, uses a slow start circuit that controls the heating to prevent the tube from burning to a crisp too quickly on you. With a volume knob, a low, a high, and a gain knob you can cut right through the mix to let your playing really shine. The toggle switch on this pedal gives you an optional mid-boost. 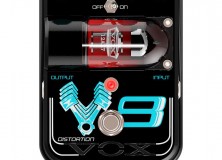 The V8 Distortion also features the slowed heater current circuitry to preserve the lifespan of the tube and with the design of the pedal the natural sound of your guitar still shines through even when glazed with the already thick gain. The four knobs control volume, bass, tone, and gain, plus the toggle switch gives a mid-shift ability so you can move the mid-range peaks around in your EQ that can either bump up your attack or slice through the mix for piercing leads. 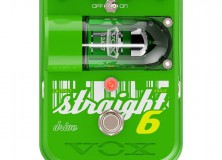 The Straight 6 is designed in favor of those rich British overdriven tones and it retains much of the design characteristics as the other pedals have. The four knobs control volume levels, bass, tone, and gain, and the toggle switch turns the brightness on, pushing more highs through. For added authenticity you can speak with a British accent and fumble with your words as you talk about what level the volume knob goes up to.
http://www.youtube.com/watch?feature=player_embedded&v=4_pIusaO1dU